New research from Australia shows there's more concern than ever over the effects of alcohol-related violence, with one in five Aussies having been affected by a combination of violence and booze. The figures show 3.1million people, have endured alcohol-related violence or know a friend or relative who has. The stats have been released this morning at the simultaneous launch of the National Alliance Against Alcohol Related Violence in Sydney and Melbourne.
25 drug and alcohol organisations have banded together to form the alliance, which is calling on the federal government to reform the alcohol taxation system and review alcohol's place under the national competition policy. One of those organisations is the National Drug Research Institute whose lead researcher Dr Tanya Chikritzhs.

It's Plunket Week at the Southland Museum and Art Gallery with all hands on deck to weigh and measure no fewer than 11 baby tuatara that have emerged from their shells since last weekend. The new arrivals mark the first time second-generation captive punctatus tuatara have been successfully bred at the museum. Parents 22-year old Charlie and 13- year old Gael have been happy to hand over maternity duty to tuatara curator Lindsay Hazley, who's been hovering over the brood for the past 200 days of their incubation.

The year is 1941. In the Libyan desert, the battle for Sidi Aziz is about to begin . . .Brigadier Hargest and his brigade headquarters find themselves in the direct path of Rommel's Afrika Corps.

In He Rourou today there's an interview with the late Miria Simpson, a staunch Maori language advocate, historian, writer and editor.

The times, they are a changing. The world we live in today is a far cry from that in which a lot of us grew up. This is a world of XBox, of near-compulsory cellphones, of fast, faster and fastest food. A world of gratification anticipation - where the things we want are expected NOW, and not a moment later.
It's a world of convenience - and according to nutritionists, physicians and media hype - it's wreaking havoc on the health of our children.
Joey Marc is a woman with a passion to turn this trend around. She owns a business called Happy Kids Fun Parties - promoting fun and active variations on the typical birthday party, she's even started a kid's rock-band called Kids4Life, who deliver healthy messages in a hip way through song and dance. And, together with husband Richard, she's just written a book entitled Please Mum Don't Supersize Me!, a simple and straightforward parents guide to a happier, healthier child. 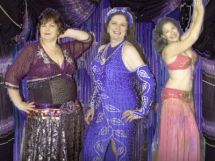 Pictured left: (left to right) Marianne, Judith and Bronnie, or Kadija, Kashmir and Sahar when the music starts!

In a preview of tonight's Exploring Antarctica Festival public talk, Dacia Herbulock talks to experts about protecting Antarctica and its fragile environment. Cath Wallace of Victoria University and the Environment and Conservation Organisations of NZ; Joanna Mossop of Victoria University Law School; and Neil Gilbert of Antarctica New Zealand. They'll be appearing tonight, as part of the Exploring Antarctica Festival's Seminar Series, a free event from 5:30 at the Paramount Theatre in Wellington. The Festival runs until April 20.