A group of human rights lawyers in Australia says the Australian Governmennt must act quickly and protect all the people in immigration detention from Covid-19.

Latest reports are that there have been 12 positive cases among the people who had been held at the Park Road Hotel in Melbourne.

46 have now been released into the community but 14 remain there and more than 100 are being held in detention around Australia.

The lawyers want all people brought from off shore detention in Papua New Guinea or Nauru to be released to protect them from any further outbreaks.

The Human Rights Law Centre's David Burke says the Morrison Government has not been doing enough to protect these people.

"These men have been locked up a crammed hotel for more than two years when there is no reason for them to be detained in the first place. The way to protect them is to release them, to lower the number of people being held in these facilities, but the government has simply refused to do that, " he said

Newly reappointed Samoan cabinet minister, Toesulusulu Cedric Schuster, has warned against driving while under the influence.

The Minister was sworn today by the Speaker of the House, Li'o Papalii Taeu Masipa'u.

After the ceremony, Toesulusulu said he's learned his lesson and urged members of the public not to repeat his mistake, of driving drunk.

Last week, Toeolesulusulu was given a 2,000 tala fine after pleading guilty to three related traffic offences, but he was also discharged without conviction.

He said "I am remorseful and I know it was the wrong thing to do. We all make mistakes and we learn from them."

During his sentencing, Judge Alalatoa Rosella Papalii outlined the data for the Driving under the Influence cases and pointed out the numbers had increased significantly.

After the swearing in Toesulusulu said he is ready to take on his role as Minister of Natural Resources and Environment and the Samoa Tourism Authority.

In Kiribati, the Ministry of Environment, Lands and Agricultural Development says illegal mining of sand and aggregate on South Tarawa and Betio is increasing. 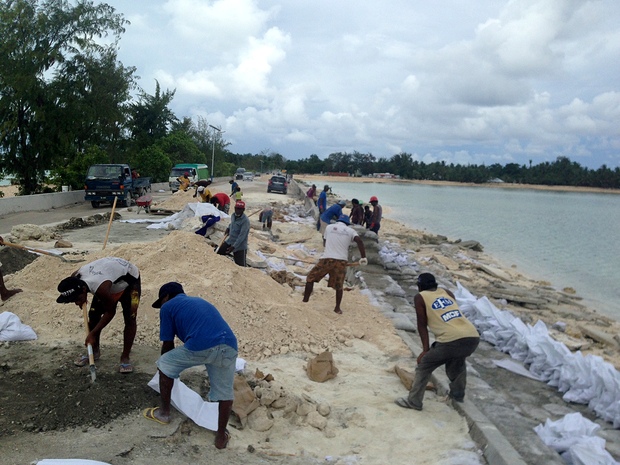 Mr Tabokai says sand and aggregate mining could be acceptable for decorating burial grounds and floors but the practice has not been encouraged to minimize coastal erosion.

Meat works in New Zealand have recruited 200 workers from the Cook Islands for the spring lamb season starting next month.

The first workers arrive from Rarotonga to the Alliance Group's two processing plants in Southland from next week - joining 50 workers from the Cook Islands who haven't been able to return home because of flight restrictions related to the pandemic.

Alliance Group manager, Renee Walker, says some of the workers who have stayed on are with family in Southland while others are receiving help with accommodation and pastoral care from the Whanua Ora funding agency, Pasifika Futures.

Ms Walker expects 80-percent of the Cook Islanders who have worked at the meat processing plants will return for the peak season starting from November 4th.

Samoa police are investigating how a man left a Covid-19 quarantine site illegally.

Once out the man tried to obtain money at a Western Union branch in Apia.

Members of the National Emergency Operations Centre, in full protective gear, have been spraying down the Development Bank of Samoa building, specifically the area occupied by Western Union.

The man was recaptured this morning.