The General Secretary of the Pacific Conference of Churches, Reverend James Bhagwan, says its vital Pacific voices are heard at the UN's Climate Change Conference in Glasgow which begins at the end of this month.

The conference, also known as COP26, is billed as the most important climate meeting since Paris in 2015 when countries reached the landmark agreement to try to limit the increase in global temperatures at 1.5 degrees Celsius.

Bhagwan recognized that the 2021 conference would face serious challenges, in part due to travel restrictions related to Covid-19.

He stated that it was important that as many Pacific delegations attend as possible, so that Pacific voices could be heard. 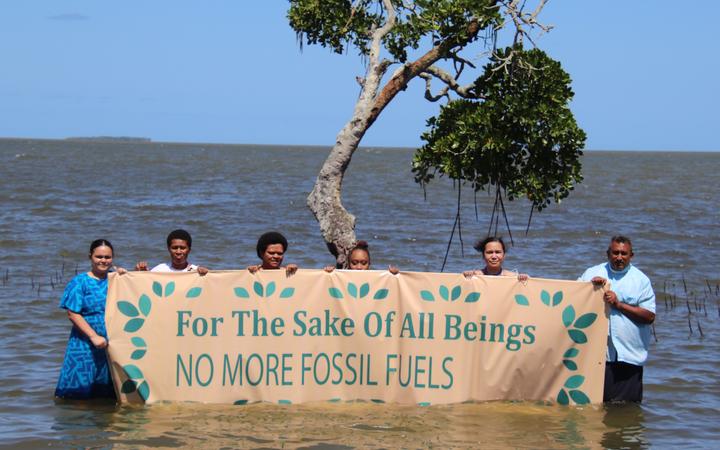 The Pacific Conference of Churches has partnered with Green Faith, an inter-religious global movement which calls for the end of fossil fuels. Photo: PCC

This was vital given that Pacific nations have to continue asking the global community to commit to the Paris agreement and the 1.5 degree threshold. Climate change may pose more abstract issues such as financial and political policy for non-Pacific countries. However, for the Pacific nations climate change is a matter of life and death.

Bhagwan stated that they will also be working with the World Council of Churches, faith communities, and civil society to promote the Pacific view of climate change response.

This COP26 is crucial for the Planet

Furthermore, he emphasized that it was important that the Oceans pathway becomes part of the UNFCCC (United Nations Framework Convention on Climate Change). Bhagwan hoped that the meeting would produce some clear commitments with clear timelines, rather than empty rhetoric which has been all too common in the past.

Along the way, Bhagwan was attending other meetings, in order to keep his carbon footprint to a minimum. He was travelling with a young climate justice advocate, and was hoping that other representatives from the Pacific Islands Climate Action Network would also be able to attend the conference.

While some Pacific Nations' advocates could not leave the Islands, due to Covid restrictions, they would hopefully be able to rely on their overseas-based United Nations representatives to negotiate on their behalf. 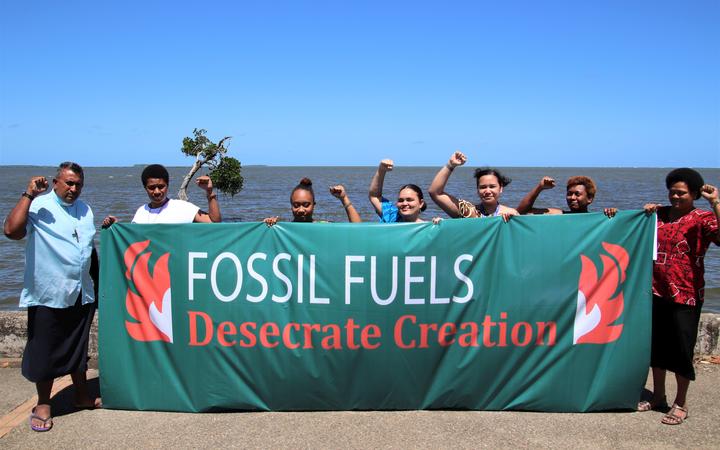 Reverend James Bhagwan (from left) and members of the PCC join Green Faith to call for the end of fossil fuels. Photo: PCC

Climate action begins this weekend in the Pacific

The Conference of Churches has partnered with Green Faith a multi-faith climate and environmental movement which calls for the end of fossil fuels. On Sunday, member churches in Fiji would be displaying banners to present this message, both to the domestic and foreign governments alike. He hoped that large consumers of fossil fuels, such as the United States of America and Australia, would take notice.

Bhagwan noted that outside the region the perception of the Pacific was a massive expanse of empty water, marked by a few tiny islands.

In truth, the Pacific is a region of ocean states. Thus the impacts of fossil fuel consumption and extraction are felt directly in rising sea levels and other symptoms of climate change.

As the Pacific is the first reason to see the sunrise, Bhagwan felt that it was a good place to start spreading the message of the need for change and understanding of the threat that climate change poses. He hoped that the Churches' message to the industrialized nations would help them find the moral and political courage to take action on climate issues.

Bhagwan noted that because of Covid-19, and the travel restrictions it creates, many civil society groups in the Pacific had asked that conference be postponed so that as many climate stakeholders could attend. At the same time he acknowledged that delaying the conference would defer urgent decision-making and vital time to take action would be lost - and that the time to take action was already dwindling. Hope, from his faith, encouraged him to believe that global leaders would rise to the occasion and put the interests of the world ahead of their own domestic agendas.