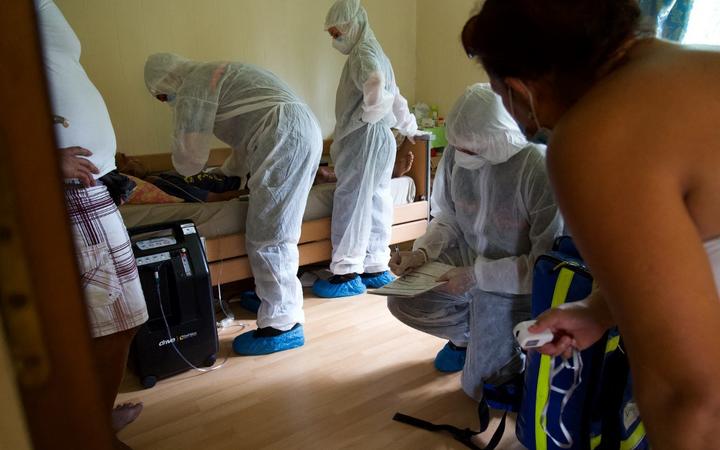 Firemen arrive at a COVID-19 patient's home to carry him to the French Polynesia Hospital Centre, in Pirae. 8 September 2021. Photo: Suliane FAVENNEC / AFP

French Polynesia's Institute of Statistics says a significant number of Covid-19 related deaths are not being counted in the official figures.

More than 550 deaths have been attributed to Covid since the pandemic began, most of them since the resurgence in July.

The Institute has been conducting research into deaths at home during the pandemic and has found a 346 percent increase in what it defined as 'excess mortality' in August, the highest such figure in nearly 40 years.

Tahiti Infos reports more detail showing a larger proportion of these deaths are linked to Covid than what has been announced by the government.

The official bulletins only include deaths in hospitals.

The number of people with Covid-19 being admitted to hospital in French Polynesia continues to fall.

Yesterday there were 186 admissions, down from 206 on the previous day.

There have been six deaths in the past 24 hours according to TV station France info, after 24 fatalities over the weekend.

Nearly 150,000 people have now received a first vaccine while 128,424, or nearly 46 percent of the population, have completed the vaccination schedule.