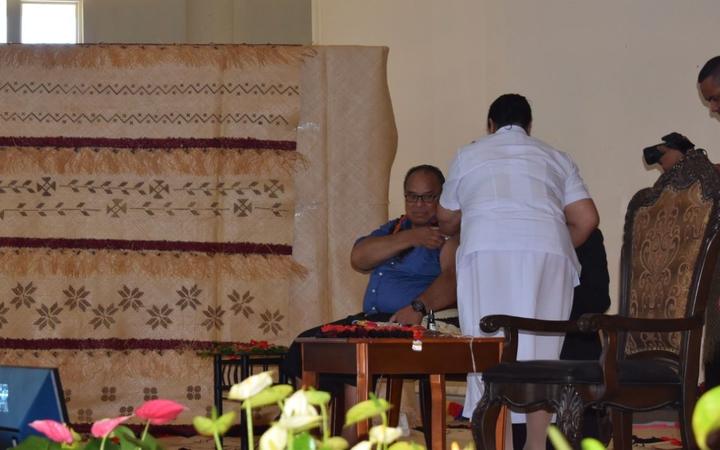 Tonga is set to introduce compulsory inoculation against Covid-19.

A Bill to amend the Public Health Act to enforce inoculation of the Public against Covid-19, was among seven Bills that government tabled into parliament this week.

The new amendment bill states that it will be a crime for anybody to refuse to be vaccinated against the virus.

Parents will also be held responsible if their children refuse to be inoculated.

Matangi Tonga online says after the first reading of the amendment Bill in Legislature it was carried with 17-0 votes.

It will be submitted to the Standing Committee on Social Services for deliberation, before it is resubmitted to parliament for its final reading.

For the past two weeks in Fiji around a thousand new Covid cases were reported each day, as the official death toll closes in on 300.

The government continues to opt against a lockdown to focus instead on vaccination.

In an appearance on local tv, the minister, Dr Ifereimi Waqainabete said that 84 percent of the people who have died from Covid in Fiji were not vaccinated, while 16 percent had received the first of the two required does of the vaccine.

He said that no one fully vaccinated against the virus had died in Fiji.

Health ministry figures indicate 85 percent of Fiji's eligible population has received at least a first dose of the vaccine, and almost 30 percent have had two doses.

The organisers of Papua New Guinea's International Short Film Festival are this year calling for entries relating to Covid-19.

Secondary schools, tertiary institutions and parishes are encouraged to showcase their best film-making skills at the Catholic Church-run event.

Priest Ambrose Pereira said the pandemic theme of the festival was chosen to educate Papuans on keeping safe.

He said the mood amongst most youth was that of ignorance.

"There is a resistance to say that the pandemic exists, especially in pockets where perhaps education is low. And maybe also where education is high. That we are Melanesian. That it will not touch us. That we are protected. That it's only a white man's disease."

Race over for Samoa, Cooks after Olympic canoe sprints

The Oympic race is over for Samoa and the Cook Islands after competing in the canoe sprints event at the 2020 Tokyo Games today.

Kohl Horton of the Cook Islands and Samoa's Rudolf Williams advanced to the quarter finals after finishing 4th and 5th in the 200m kayak sprint race.

Tuva'a Clifton joined them after finishing 4th out of 5 in Heat 5 of the K1 race, but that's where it ended for the kayakers with Clifton finishing fourth in his quarter-final race, Williams finishing last, and Horton unable to finish.

She just missed out on competing in the semi-final after finishing 4th in the quarter-final.

A book detailing the lives of 12 Cook Islands women in Tokoroa has just been launched to coincide with Cook Islands Language Week.

In Te Kinakina: E Ngara I te Ngari, the authors detail their migration to and livelihoods in Tokoroa.