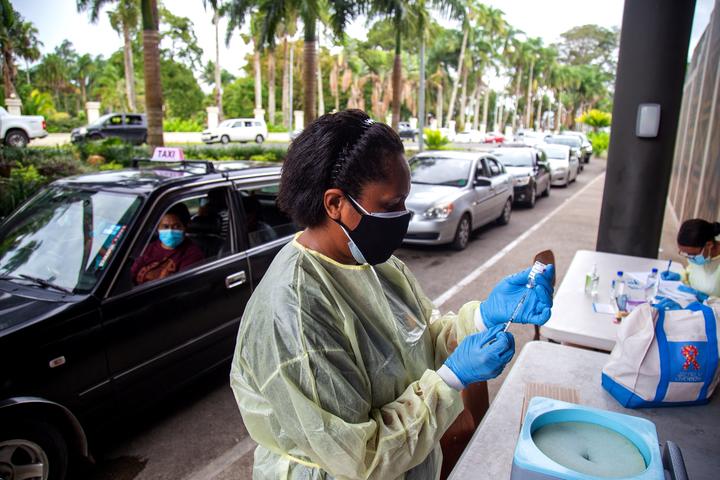 Fiji is recording an average of eight deaths a day from Covid-19.

Health authorities reported 632 new cases in the latest daily update, meaning over 30-thousand people have tested positive to the virus since April.

Two more deaths from the virus were reported, but the Ministry of Health says the 7-day rolling average of Covid deaths per day is eight.

Since April 239 deaths have been recorded from Covid in Fiji. Before the current outbreak began, only two people in Fiji had died from Covid-19.

However, the ministry also recorded 130 Covid-positive patients who died from serious medical conditions they had before contracting the virus - these are not classified as Covid deaths.

The government has embarked on another vaccination drive today.

So far almost 83 percent of the eligibile poulation has received a first dose - and 25 percent has had two shots.

Following two major fire incidents last night Fiji police have warned the public not to use them to incite unrest.

The first fire reported at 8pm local time occurred in central Ba where 8 shops were destroyed.

The second case of fire was reported at the Raiwaqa Police Station after 11pm. Police indicated the two fires were not linked.

But a police release says certain individuals tried to use the two fires to rally support against the government to incite violence and instability.

It says police won't allow this to happen, and that Fijians should expect more stringent measures to be implemented.

As a safety precaution for judges amid the protest, the Supreme Court has cancelled all matters initally scheduled for today, as it did on Friday.

The Samoa Observer reports that more than a thousand HRPP supporters gathered in front of the Government building this morning.

Many of the protestors say they are marching in support of the former Tuilaepa Sailele Malielegaoi-led Government.

Tuilaepa claims the courts acted against the constitution by assuming the role of the head of state to convene parliament.

Tuila'epa Sa'ilele Malielegaoi, the attorney general, the former speaker and the clerk of parliament are already to appear before the Supreme Court for their roles in preventing parliament from convening.

Now Samoa's new prime minister Fiame Naomi Mata'afa said her FAST party government may add to the existing petition or file an additional one against Tuila'epa.

She said his recent speeches and social media attacks on the judiciary were evidence of ongoing contempt.

"We really need to drive home that message to Samoans that when they undertake approaches that have no basis, that there is no evidence, that there is blatant disrespect of the institutions of the courts, then I think we have to take people to task for it."

New Caledonia's pro-independence Palika Party will gear up to the December 12th independence referendum with an event scheduled on the 12th of each month.

The French government set the date in June, ending the 1998 Noumea Accord on decolonisation a year before the expected expiry.

Palika's leadership says it wants to find and mobilise those who didn't vote in the last two referendums, in which a shrinking majority voted against independence.

Meanwhile the anti-independence Rassemblement has held its Congress, only days after the pro-French camp failed to secure the presidency of the territorial legislature.

Its candidate Virginie Ruffenach didn't get the support of other anti-independence members, who opted to vote blank.

There's a rat infestation problem at the US Post Office in American Samoa, but local authorities require federal approval before attacking the pest.

Territorial health officials are waiting for official permission from the US Postal Service to enter the facility for inspection and address the infestation.

Samoa News reports that the rat problem was raised during a House Health Committee hearing.

A local lawmaker, Luaitaua Gene Pan, told the hearing that every time he goes to the Post Office to pick up his mail, the Post Master or other senior officials approach him and ask for assistance with the problem of the many rats living inside the building.

He said that according to several employees of the Post Office, the problem of rats living in the building is not new and there were times that some mail package were eaten by rats.

In response, the acting director of the territory's health department, Vesi Talalelei Fautanu Jr, said they were waiting for an official communication from the US Postal Service before they could move in to take care of the rats problem.