France and French Polynesia have agreed to jointly spend $US60 million to build 17 cyclone shelters across the Tuamotu archipelago.

This was announced on Manihi atoll, where the visiting French president Emmanuel Macron inaugurated the construction site for a shelter for the atoll's 600 inhabitants. 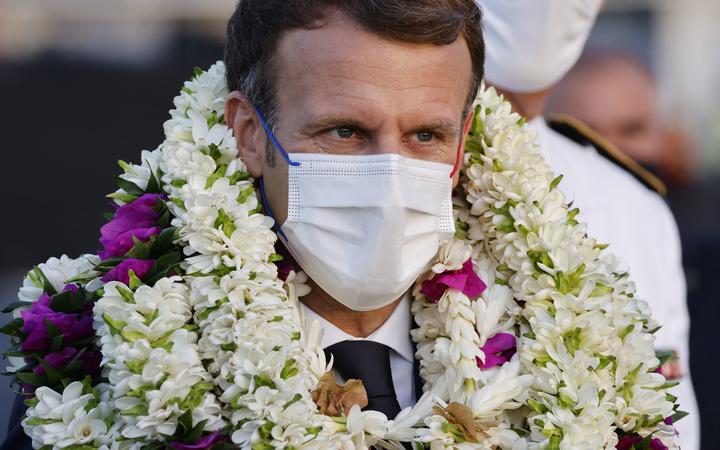 France's President Emmanuel Macron is covered in garlands during a welcoming ceremony upon his arrival at Faa'a international airport for a visit to Tahiti in French Polynesia Photo: Ludovic MARIN / AFP

The shelters are scheduled to be built by 2027 to extend protection for a further 8,000 residents. So far 27 shelters have been erected.

Macron stopped on Manihi on his way back to Tahiti after a visit to Hiva Oa.

The French Polynesian president Edouard Fritch, who is travelling with Mr Macron, told local media that he asked Paris for another loan to cope with problems at the social welfare agency CPS and Air Tahiti Nui.

A delegation from Wallis and Futuna is expected to fly to French Polynesia tomorrow (Wednesday) to meet President Macron.

According to the French prefect in Wallis, Macron originally had Wallis and Futuna on his itinerary, but called off a visit because of the restrictions linked to the Covid-19 pandemic.

He said the 14-member delegation would include representatives of the three traditional kingdoms as well as the Catholic archbishop.

In March, Wallis and Futuna had a Covid-19 community outbreak, which prompted a strict lockdown.

A man in French Polynesia has been taken into custody for questioning for insulting the French president Emmanuel Macron shortly after he had arrived at Tahiti's airport.

Tahiti-infos reports the individual joined demonstrators lined up along the route of the presidential convoy to Tahiti's hospital.

Demonstrations by anti-nuclear groups and the pro-independence opposition are banned for the duration of the president's four-day visit..

Reports say the groups distanced themselves from the individual, saying he wasn't one of their members.

He is due in court and expected to be tried for insulting a person in public authority.