Unofficial results from the election office in American Samoa show Lemanu Sialega Mauga and Talauega Eleasalo Alo have registered a decisive win in the gubernatorial race. 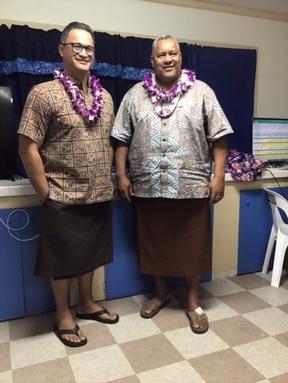 Results released by the office show the pair securing 7,154 of the 11,861 votes counted, more than 60 percent of the votes.

Lemanu and Talauega won convincingly in all districts except Vaifanua, the home district of candidate for Senate President Gaoteote Palaie Tofau.

The margin however was just 44 votes.

The biggest victory for the winning camp was in Tuala-uta where they received 1,481 votes while all the other challengers combined had 936 ballots.

The campaign Committee Chairman for the winners, Malemo Tausaga, said the candidates will make their first public address today.

In the congressional race, Aumua Amata Radewagen registered a landslide win polling 9,880 votes or 83.5 percent of the total votes cast.

Aumua carried all of the 17 districts to win a fourth term as American Samoa's congresswoman.

In the local House of Representatives election 16 of the 20 incumbents were re-elected in yesterday's voting.

The incumbents who lost their seats were:

Su'a Alex Jennings is returning as the faipule for Swains , after being selected in a meeting of Swains voters last week.

These unofficial results, released by the Election Office this morning, will be made official after 7 days.