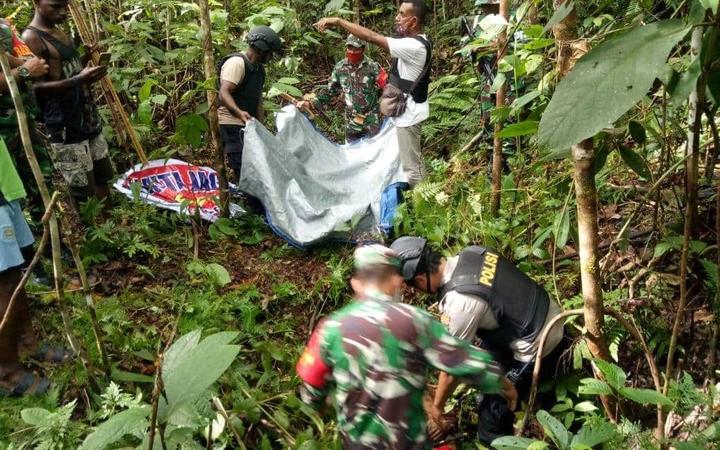 The bodies of Elias Karunggu and Seru Karunggu were recovered later by the military with the assistance of the locals Photo: Supplied

The men were shot dead by the military who say they were part of an armed criminal group that's been attacking them.

The two men, Elias Karunggu and Seru Karunggu, were part of a community displaced by ongoing conflict in recent months between Indonesia's military and the pro-independence West Papua Liberation Army in the region.

The Liberation Army said the pair were shot dead by Indonesia's military forces without provocation as the displaced community was on the move towards Nduga's capital Keneyam.

The following day hundreds of people gathered in Keneyam and demanded the bodies be handed over to their families.

Indonesia's military told relatives of the men that the pair had been armed and were shot as part of a gunfire exchange.

This has been backed up by Regent Yairus Gwijangge who said the Indonesian military were wrongly blamed for shooting innocent people in local media reports.

"I'm calling for the Indonesian president to immediately withdraw all troops from West Papua and allow ordinary people, who have been internally displaced in their own land, to resettle in their villages peacefully," Mr Wenda said.

It's estimated that over 45,000 people have been displaced in Nduga due to the conflict since December 2018.

The Liberation Army alleged that Indonesia's military kidnapped the pair and tortured them before killing them and dumping their bodies in nearby forest.

The bodies were recovered later by the military with the assistance of the locals.

But an Indonesian military spokesman, Colonel Czi Gusti Nyoman said the death of the pair was carried out by soldiers in a Task Force Team as part of a deterrence operation.

He said the two Papuans were found to be carrying a gun, machetes and axes.