A Pacific Island rugby league team based in New Caledonia and Vanuatu is pushing to join the Queensland Cup in 2023, despite the global uncertainty because of Covid-19.

The Pacifique Treize launched in May and has already held testing days for prospective players in Noumea, Honiara and Port Vila.

Prospective players were put through their paces in the Noumea rain. Photo: Pacific Treize

The team is campaigning to join an expanded Intrust Super Cup in 2023, and its members believe they offer the potential to grow rugby league into exciting new territories.

"To introduce this game to the French Territory: New Caledonia, Wallis and Futuna and Tahiti, I think it just sort of unites the countries together," team director Sandy Marango said on the line from Australia.

"Vanuatu was a part of the French colonies and there's always a tie between New Caledonia and Vanuatu. To come up with this concept I think it's a great idea to introduce this game to bring people together. It's a good thing moving forward." 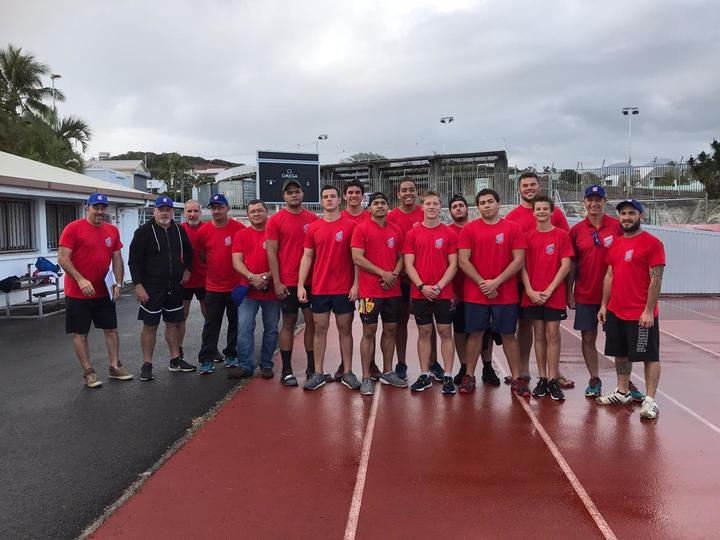 Deespite the logistical and financial challenges caused by Covid-19, Marango, who previously lived in Vanuatu, said the Pacifique Treize bid continued to be very active in the local communities.

"At this stage it's a bit of a setback because of Covid-19 but the guys are working behind the scenes, negotiating with stakeholders and the group of islands that we decided to be part of this organisation," he said.

"There's a lot of work has to be done to get teams together in order to have all these [testing day] trials but there will be a lot of negotiation and work behind the scenes to try and make something happen."

Marango said discussions about funding and corporate support were ongoing as part of their negotiations but the bid team would continue to work hard in promoting rugby league throughout the French Pacific and gaining community support.

After staging a handful of testing days, the Pacifique Treize are hoping to arrange some competitive matches in the coming months.

"We're looking at some sort of trial before the end of the year," Marango said. "It has to be something like either the Vanuatu side playing New Caledonia residents side - nothing is confirmed yet but there is a possibility. If it happens it happens [and] if not we have to look beyond this year and look at what happens next year."

In a welcome boost to their asipirations, Pacifique Treize has been certified as an official affiliate of the French Rugby League Federation.

The link with the French Federations enables A.S. Pacifique XIII to run competitions and high performance programmes within New Caledonia, Wallis and Futuna and French Polynesia.

Vice-President, Laurent Garnier, said the partnership will develop local talent and open up more opportunities for the Pacifique Treize bid.

"As a former player and coach in France and Australia, and a TV commentator for rugby league, I am delighted with the opportunity this will give young talents in the French territories of the Pacific," he said.

"We believe that we will be able to create a high-performance culture which will allow us to develop the local talent, and provide long term success for not only Pacifique Treize, but also the French national team."

The @FFRXIII has certified @pacifiquexiii as an official affiliate of the Federation, allowing the organisation to run programmes and competitions throughout New Caledonia, Wallis & Futuna and French Polynesia.

Noumea-based Board Member Manual Jalabert said the initiative was a great springboard for the youth of the French-Pacific and also for French Rugby League.

"Australia is a major nation in the sport and offers us the opportunity to participate in one of the biggest championships in the world and will provide new and beautiful opportunities for our youth."

A.S. Pacifique XIII will coordinate all programmes within New Caledonia, Wallis and Futuna and French Polynesia in partnership with the Pacifique Treize bid team, whilst all activities in Vanuatu and the Solomon Islands will be coordinated by their countries's respective rugby league governing bodies.