With the government subsidizing the copra buying price at US50 cents per pound as incentive and multiple ships servicing the outer islands, Marshall Islands copra makers since January have delivered a bumper crop to Majuro's coconut oil processing factory.

Nine months into fiscal year 2020, 5,859.75 tons have been delivered to the Tobolar Copra Processing Authority in Majuro - a tonnage level that in most years would constitute a solid year of copra production. 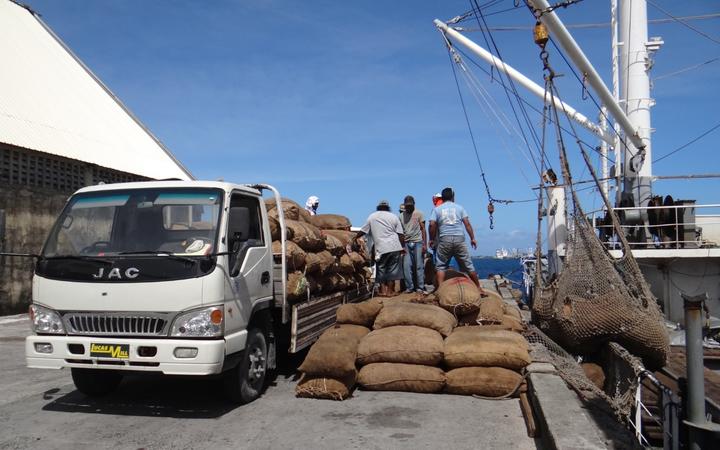 Bags of copra being offloaded for milling at the Tobolar Copra Processing Authority plant in Majuro. Photo: Hilary Hosia.

The nine-month tonnage total has already surpassed the 12-month fiscal year totals in six of the past 14 years.

Copra production is on track in FY2020, which ends September 30, for a second consecutive fiscal year with over 7,000 tons of copra processed.

This has never been done before since records began being kept in 1951. And, if the shipping industry can maintain the feverish pitch that has seen both the January-March and the April-June quarters bring in over 2,400 tons, copra makers could set an all-time record for production in the 70 years since records have been kept.

There are a lot of "ifs" as the final quarter moves into action, including the nightmare scenario of possible future arrival of coronavirus that would certainly lead to a halt to ship service to the outer islands - just as the dengue fever outbreak in 2019 forced a halt to most shipping late last year.

The shipping halt last year curtailed delivery of copra to the Tobolar plant, with only 1,000 tons of copra delivered in October-December quarter - nearly 60 percent lower than the most recent two quarters in 2020 with fully operating shipping service.

Ailinglaplap Atoll is leading the charge this year, accounting for over 20 percent of the production with 1,347.74 tons, according to a tonnage report from the Tobolar Copra Processing Authority.

Fiscal year 2019 saw 7,233.46 tons delivered to Tobolar - a tonnage level that the current fiscal year could surpass if government can maintain the strong pickup and delivery pace of the past two quarters from now through September 30.