For months, Nickora Kaierua has been waiting for answers about how her brother, Eritara, met his demise on the lonely seas of the Pacific. 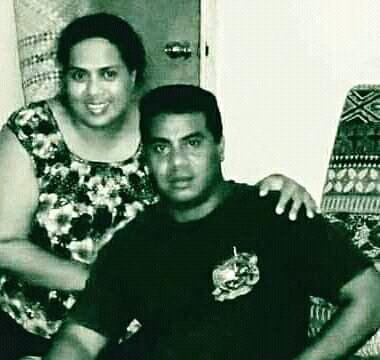 His last journey saw him leave Pohnpei, in Federated States of Micronesia, on board a rusting Taiwanese purse seiner, the Win Far 636, as it set out to ply the Pacific for tuna.

Eritara Aati Kaierua, who was from Kiribati, was one of hundreds of people - many from small Pacific countries like Kiribati, the Marshall Islands and Tuvalu - who sign up to become fisheries observers. For months at a time, they live on ships, documenting what's hauled in, checking the crews are obeying the rules.

But a few weeks into the voyage, the 40-year-old father of four was dead on the floor of his cabin with a massive blunt trauma to the head, his log book open beside him. The Kiribati police are investigating his death as a homicide.

Two crew were arrested, but later released after questioning. The vessel is still detained in Tarawa as investigations continue.

Since 2010, ten fisheries observers are known to have died on the high seas of the Pacific, at least half of them in suspicious circumstances. There have been few convictions and just as few answers for families.

"Why did he die? Who murdered him and why?" asked Nickora, Eritara's sister.

"And then there's other questions, like, he was protecting our seas why was he not protected? If our fish are providing millions for our country, then why has the fisheries system failed to protect him?"

Nickora Kaierua said it had been months since her brother's death and the family, including his wife Tekarara and their four children Robert, Aati, Tuateira and Bebe, have had no closure.

On a gofundme page set up to help support Eritara's family his last message to them is shared.

"Hello my wife and children whom I love so much… how are my children? Yes, let them know to go hard at school so that they become intelligent and wise. Tell them to study really hard and to be obedient to you at all times… I love you all and wish you all the best. Eritara Aatii" 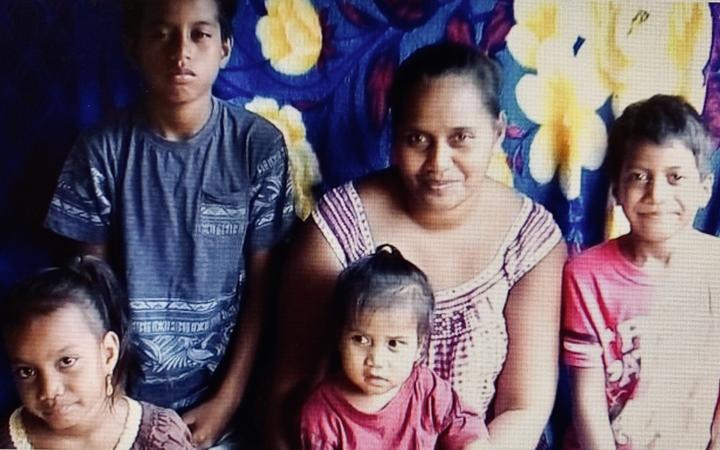 Eritara Kaierua's wife Tekarara and their four children Robert, Aati, Tuateira and Bebe depended on their father's income as a fisheries observer. Photo: Courtesy of the Kaierua family

It's a story that's played out for dozens of families across the Pacific. Like Charlie Lasisi, whose body was found wrapped in chains. Or James Numbaru, whose fall overboard was caught on camera. Their deaths also remain unsolved years later.

"The [situation] that Eritara got into was because of the negligence and ignorance of the fisheries office in regards to our safety," said one fisheries observer, who spoke to RNZ Pacific on the condition of anonymity.

They said the death highlighted the danger and lack of protections they face every time they board a ship for weeks and sometimes months at sea, and how years of efforts to tighten regulations to protect the vulnerable observer workforce have largely fallen flat.

The Pacific is the world's most lucrative fishing ground, supplying about 60 percent of the world's tuna. Most of the fishing is done by a foreign fleet, who pay a fee to island countries to fish in their economic zones.

These Pacific Island countries run observer programmes that employ observers, who spend weeks and sometimes even months alone on these ships collecting data about what's hauled on board, and are obliged to report any violations and bycatch they see.

"As a result of that role very often they are in a position of being in conflict with the vessel," said Alfred Cook, a tuna industry expert with the World Wide Fund for Nature. "Because they could report something that could ultimately result in a fine or some other type of sanction against the vessel." 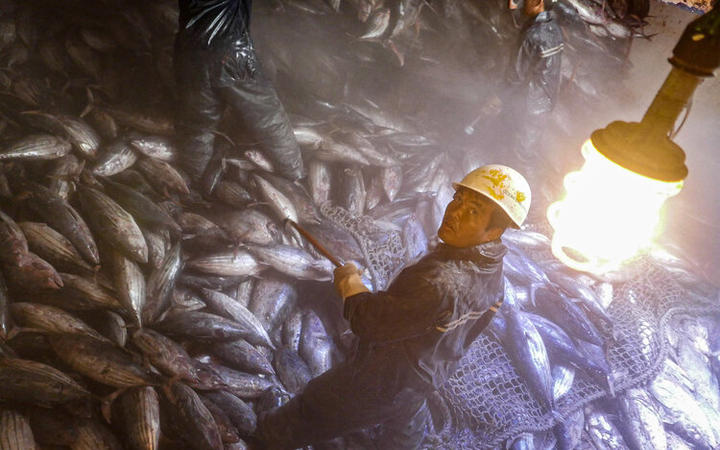 Fishermen at work in the hold of a purse seiner in the Marshall Islands. Photo: Francisco Blaha

One regional body involved with observer training and standards in the region is the Pacific Islands Forum Fisheries Agency. Its director general, Manu Tupou Roosen, said safety was always a priority.

"For example, the observer must have a two-way communication device, a waterproof personal lifesaving beacon. That where an observer is missing or presumed fallen overboard that the vessel promptly ceases fishing and commences a search and rescue and informs relevant parties," she said.

But these measures are not applied or enforced equally across the agency's 17 member countries, most of them small and with little resource. RNZ Pacific has been told by two people familiar with the industry that much of this equipment doesn't make it to the observers.

Nikora Kaierua said Eritara was never given his two-way communication device, instead relying on the ship's communication system in the days leading up to his death.

And one observer said they often saw media reports of funding and equipment donated, including by New Zealand, to member countries. But it never made it to him or the other observers he knows. 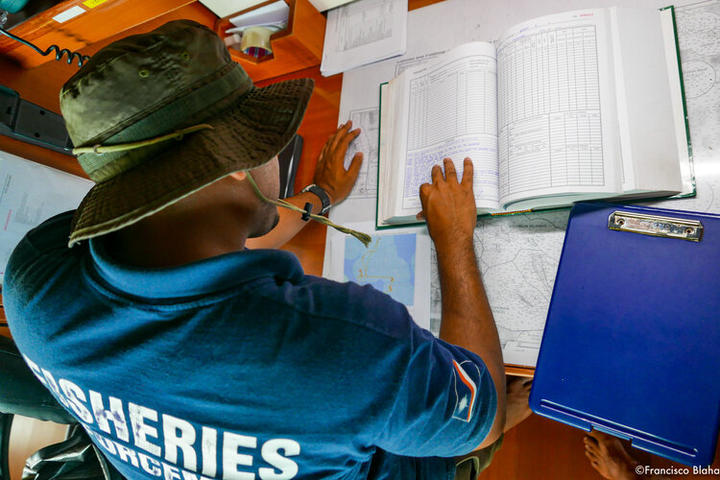 "Imagine being … all alone and your only level of protection is that that is provided by your particular national observer programme and you are going to them, telling them, 'hey I am concerned', and the response is 'well thank you for your input' and then you never hear anything after that.

"How safe would you feel going out on a vessel?" Mr Cook asked.

This year, with the closure of ports and airports around the world because of the Covid-19 pandemic, Pacific countries have temporarily withdrawn their observers from foreign fleets.

Ms Tupou Roosen said her organisation was using it as an opportunity to review observer safety.

"The FFA will be undertaking a study to look at how we can best guard observer safety and sustain livelihoods. This will be a comprehensive and long-range study," Manu Tupou Roosen said.

But Maurice Brownjohn, the commercial manager for the Parties to the Nauru Agreement, a sub-regional bloc in the purse seine fishery, said all deaths on the high seas are properly investigated.

Indeed, in Mr Kaierua's case, the death was reported on 3 March in the waters off Nauru, and the Taiwanese government then alerted the Western and Central Pacific Fisheries Commission and the government of Kiribati. The ship then sailed to Tarawa, the Kiribati capital. But Kiribati police have said they're suspicious about the path and actions taken in the days between Mr Kaierua's death and the arrival in Tarawa.

Still, Mr Brownjohn said there have only been 10 deaths in the past decade in an industry which has between seven and eight hundred observers across the PNA regions and more than 2000 across the Pacific.

Also fisheries is one of the most dangerous industries in the world in which the International Labour Organisation estimates there are 24,000 fatalities a year.

"It's wrong to say that observers are a dangerous career," Mr Brownjohn said.

"The observers are trained to observe, they are not policemen. They are not obliged to get into any conflict. They can make no decisions; their job is to observe," he said.

But the observer who spoke to RNZ Pacific, who has not been paid for months because of the programme's Covid-19 suspension, said many observers did fear for their safety every time they stepped on board a vessel.

They had nowhere safe to store sensitive documents and information, they said, and were constantly worried about being spied on or intimidated.

"We find it not safe. It is very dangerous for us when the company realises what we are writing or reporting in our field reports or journals. That can be very risky to our life and safety," they said. 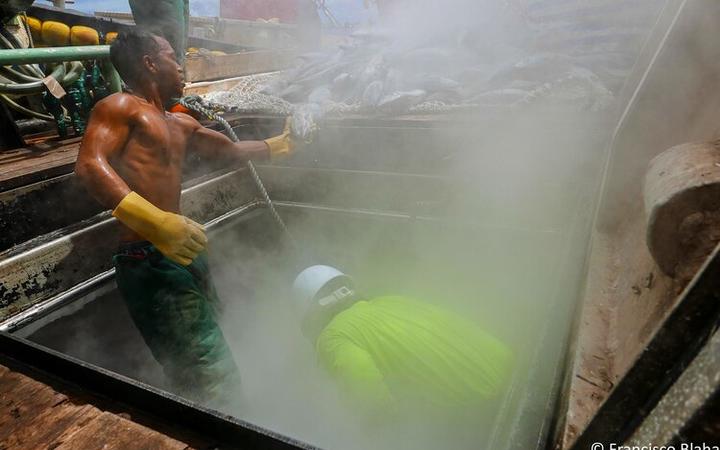 Fishermen working on a purse seiner in the Marshall Islands. Photo: Francisco Blaha

One solution touted is the use of technology instead of observers to monitor foreign fishing fleets, either through cameras, sensors or other means.

"We live in a technological era. The electronic monitoring tool will be a great way to collect information on vessels and there will be other technological ways to collect all the types of data that observers collect on vessels," she said.

But not everyone is sold on the idea. Fishing companies are resisting moves to install cameras over the cost involved, while sub-regional groups like the Parties to the Nauru Agreement are also opposed.

Its chief executive, Ludwig Kumoru, said human observers were invaluable, and it would be hard for technology to replace them.

"The data you get from observers you cannot get from any other means. You have to have a physical observer especially on the purse seiners," Mr Kumoru said.

"They can collect the data that cameras can't see and then it is a job opportunity for our people to work as observers."

The temporary suspension of the Pacific's observer programme will be reviewed at the end of the month, and hundreds of observers could again be on the seas.

But while that review takes place, the family of Eritara Aati Kaierua still wait for justice. 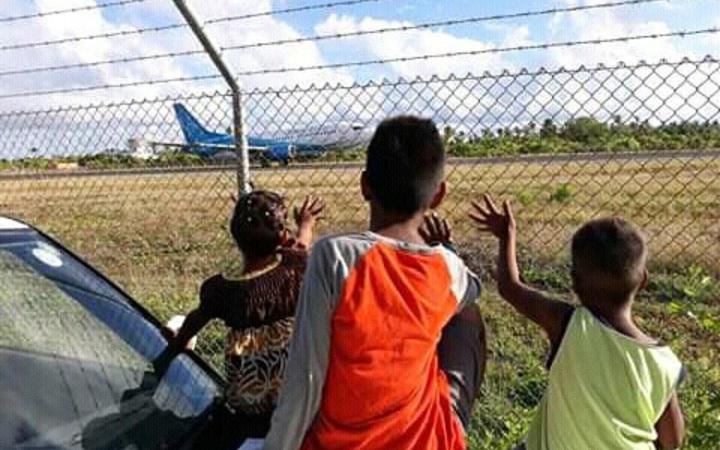 Eritara Kaierua's children wave goodbye to their father as he embarked on his last observer mission. Photo: Courtesy of the Kaierua family