Union members from an air conditioning and ventilation manufacturer in Auckland, mainly of Māori and Pacific descent, feel like they have been taken advantage of by their employer. 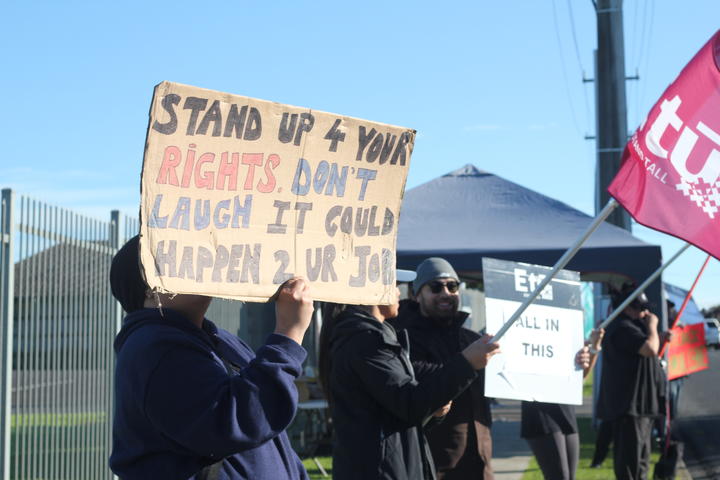 In March, Temperzone management had asked their employees to sign a consent form for the Ministry of Social Development for the company to get the government wage subsidy.

According to E tū Union, Temperzone applied for the wage subsidy on 11 May, six weeks after the country moved into alert level four.

In a statement from Temperzone, they told RNZ Pacific that they had collected consent for the subsidy before the lockdown in March, knowing it would be difficult to do so during the lockdown period.

"...but on review of the government subsidy scheme we concluded that we wouldn't be eligible under the current business format, we therefore could not, in good faith, apply for the subsidy in March as we had intended."

"Covid-19 has created a huge level of uncertainty amongst businesses.

"As we escalated quickly into level four and realised our operations would be shut down throughout this period, we moved quickly to provide various opt-in options to our people to choose from; so they could continue to receive their full pay over lock down when the business was closed, which is above and beyond our collective agreement responsibilities and in compliance with the Holidays Act."

After reviewing the "current business format", Temperzone applied in May and received $NZ2.17 million for 310 workers.

The company subsequently culled 85 jobs across the business, including both management and factory positions, citing the impact of Covid-19. 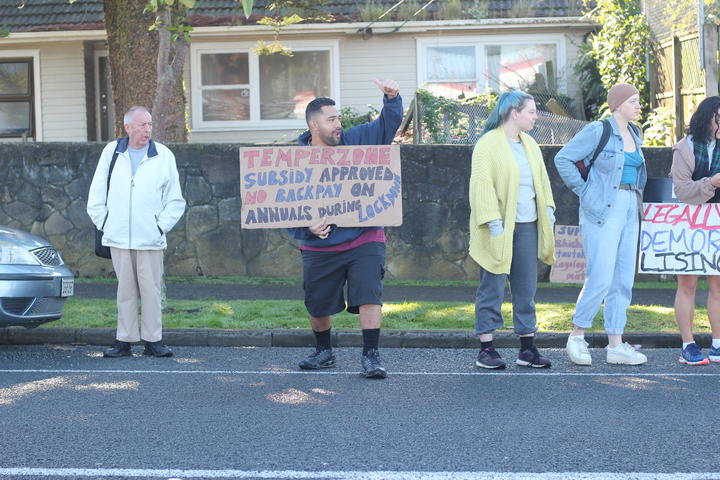 Picketing has taken place outside Temperzone in Mangere for over a month, with no action towards the union members' leave or wages. Photo: RNZ Pacific / Sela Jane Hopgood

Sam Tanuvasa has been with Temperzone for 35 years and was fortunate to return to work and still have his job. His daughter Mandy Pesaleli said he was upset when he heard the news of the redundancy.

"He was very angry," she said.

"My dad felt sorry for his friends that didn't have enough annual leave to cover the four weeks of lockdown and he even said that some of his colleagues ended up leaving the company.

"My dad said that the workers were told they had to use their annual leave or they weren't eligible to have any other leave paid out to them, so they pretty much just walked out of the job that day."

Mrs Pesaleli said growing up, she had always found Temperzone to be a family-oriented company.

"They would have Christmas parties for kids and offer scholarships for anyone who has worked in the company for more than seven years, even the children of the workers could apply.

"My dad recently told me that the staff had a meeting where management had discussed that they would be able to pay the annual leave back, but that would mean the company would have to take away the scholarships because they simply couldn't afford it," she shared. 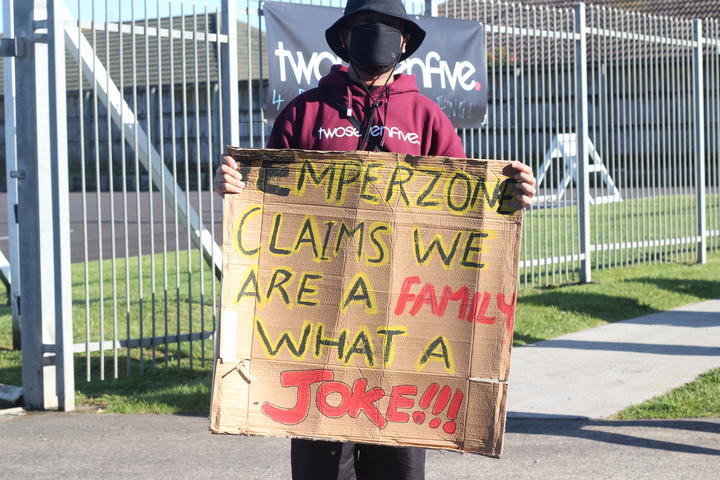 Picketing has taken place outside Temperzone in Mangere for over a month, with still no action towards the union members' leave or wages.

E tū Union Organiser Blue Rika said the company had asked for the picketing to stop.

"And we said we would stop, if they would just give the workers back all our leave or pay them the subsidy from the lockdown period.

"We are in discussions now with management, trying to sort something out because at the end of the day it comes down to deception of how they treated the workers from the start," Mr Rika said.

Mr Rika said he was hopeful Temperzone would reinstate union members with either their leave or wages.

"We may not get the full month of wage subsidy, but we are wanting the people to at least get something, whether that be a week or two, that would be a good win.

"The leave is the most important win we are after because come Christmas time, none of them have got any leave to take.

"There were some of the members who had to take advance leave during the lockdown because they had used all their leave over the Christmas period to visit their families in the islands," he said.

Temperzone employee Afa Apoua was picketing with his uncle over the weekend and has been with the company for 13 years. 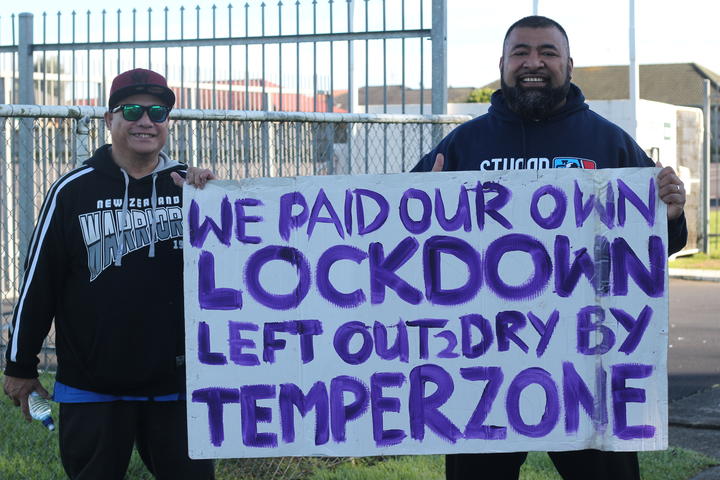 Mr Apoua said the workers felt let down by Temperzone and the lack of communication to their staff, especially those who had served more than 10 years there.

"It's hearbreaking when you hear the stories of the workers," he said.

Mr Apoua said the workers did not want to be picketing, but we had no choice.

"The workers have taken the negative effect of the Covid-19. We must survive, pay the bills and put food on the table, so we end up using our own annual leave and our long service leave.

Temperzone expressed that they are very conscious of the impact Covid-19 has had on the lives of those affected and their families.

"The reality is that the pandemic has had a significant impact on Temperzone and its business operations. Demand for Temperzone's product has significantly decreased and is forecasted to continue this same trajectory.

"As with many other Kiwi companies, we too have been forced to make some incredibly difficult decisions to ensure the viability of the business in the future. Sadly, this has included a review of our structure; a decision that was not made lightly and has affected all areas of our business, from leadership through to production.

"We value all our staff and their contribution hugely, unfortunately the impact of Covid-19 is such, that we are unable to protect them from this global issue."