A complaint has been lodged with the public prosecutor in French Polynesia over a Chinese fishing boat which ran aground in a shark sanctuary with a large quantity of sharks on board. 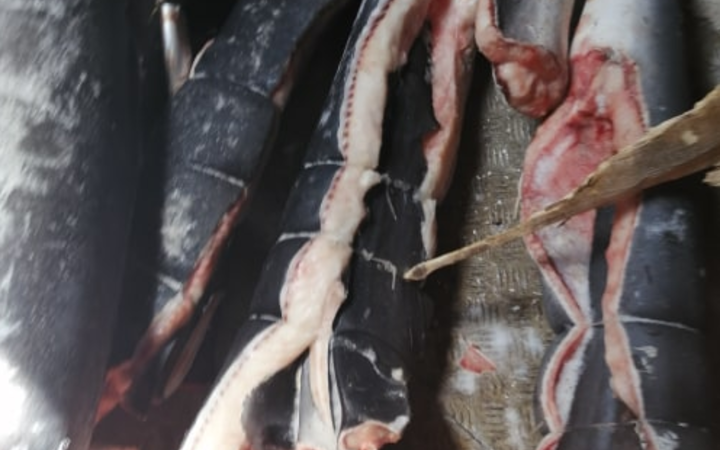 The complaint was lodged by the environmental umbrella organisation Te Ora Naho and targetted the captain and the owner of the Shen Gang Shun 1.

Te Ora Naho said the vessel had breached the laws governing protected species and it had caused marine pollution.

Last month, the Shen Gang Shun 1 ran aground on the reef of Arutua atoll after leaving Papeete where the vessel had undergone repairs and been inspected.

French rescue helicopters uplifted the 36 crew from the ship and transferred them to other fishing vessels belonging to Shenzhen Shengang Overseas Industrial Company.

Days later, while trying to assist salvage efforts, the mayor of Arutua and other fishermen discovered frozen sharks stitched up with cut-off fins inside in the vessel's hold.

https://t.co/DPVsa4bjZ2 36 crew were rescued from Chinese longliner Shen Gang Shun 1 after it run aground on Arutua atoll in the Tuamotu archipelago earlier this week pic.twitter.com/BN9fKnOpVV

The ship is still stuck and according to Te Ora Naho leaking oil threatened the atoll.

When the discovery of the sharks was reported last week, the French Polynesian government said there had been no poaching in the territorial waters and the French High Commission said no foreign ship was engaged in fishing activities in French Polynesia's waters.

French Polynesia had the world's largest shark sanctuary and Te Ora Naho said in the territory it was forbidden to possess or transport protected species, be they dead or alive.

Meanwhile, a shark protection group in Tahiti, Mao Moana Foundation, had written an open letter to the French Polynesian government asking for clarification.

An online petition launched by the foundation, which asked what the government would do for the sanctuary, had attracted almost 5000 signatures.