French Polynesia's environmental group Te Ora Naho is challenging the government over its response to a Chinese fishing vessel found with sharks in its hold. 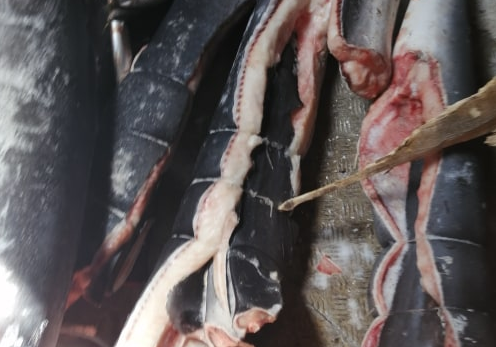 According to Te Ora Naho, laws have been broken but it's being ignored by authorities.

Last month, the ship Shen Gang Shun 1 ran aground on the reef of Arutua atoll and its crew of 36 was immediately rescued by another fishing vessel belonging to the same Chinese fishing company.

In the hold, the island's mayor found sharks, whose bodies were stitched up with cut-off fins inside them.

The vice-president, Teva Rohfritsch, issued a statement a day after the find was reported in the local media, confirming that there had been no poaching in French Polynesian waters.

The government said the ship had been repaired and restocked in Papeete in mid-March and left with 15 tons of frozen fish on board along with 26 tons of bait.

French Polynesia is the world's largest shark sanctuary and Te Ora Naho says the presence of the sharks in the ship constitutes a breach of the laws of French Polynesia.

Te Ora Naho said it was forbidden to possess or transport protected species be they dead or alive.

It said anyone found guilty of breaching the law risked a prison sentence of up to two years and a fine of up to $US160000.

Te Ora Naho questioned how it could happen that after inspecting the vessel it was allowed to leave.

It said that despite the Covid-19 crisis, the laws apply.

The French High Commission has meanwhile issued a statement, saying no foreign ships, including Chinese one, are engaged in fishing in French Polynesian waters.

It said that with the use of satellites, vessels were controlled and only allowed to transit.

Papeete, which is about 400 kilometres southwest of Arutua, is a key transshipment port for the Chinese fishing fleet in the southeast Pacific.