The authorities in New Caledonia have extended the restrictions imposed over the Covid-19 outbreak for another week until 19 April.

The decision was announced after talks involving medical experts, the French High Commission, the government and the customary Senate.

The extension was the second time that a week had been added to the original lockdown declared on 19 March.

From 20 April the emergency measures will be changed, with details of what will be eased to be announced in the course of next week. 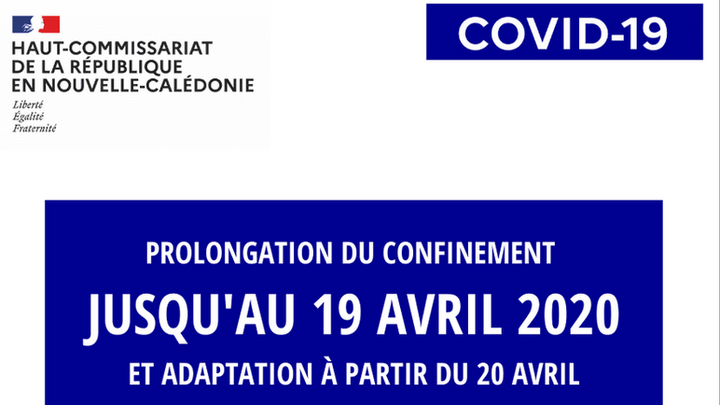 Notice of the extension of restrictions Photo: supplied

The customary Senate had been in favour of extending the restrictions for longer while some leaders in the mainly Kanak Loyalty Islands province asked for the terms of confinement to be relaxed.

The statement released today said 'the virus is not circulating in New Caledonia while the rest of the world is in a pandemic situation'.

18 positive Covid-19 cases have been recorded to date but none in the last four days.

A case last month described as the first local transmission turned out to be a false positive on retesting.

Among those carrying the virus was at least one member of the government's crisis management unit.

The diagnosis prompted the president Thierry Santa to self-isolate in a hotel in Noumea.

Lockdown conditions in force required anyone in public to carry an attestation justifying their movement.

According to the High Commission, almost 3000 people had been fined as a result of more than 120,000 police checks.

In one case, the High Commission said security forces were called to return a family to the quarantine hotel after they had absconded to their home near Noumea.

The family had been flown back to New Caledonia on a repatriation flight last week and were instructed to stay put for the mandatory two weeks.

Repatriation flights for stranded New Caledonian residents continue, with one due from French Polynesia and one from Japan due tomorrow.