Vanuatu is bracing for a direct hit from the still intensifying Cyclone Harold, which is forecast to pass straight over the central islands, forcing the country to contend with dual emergencies. 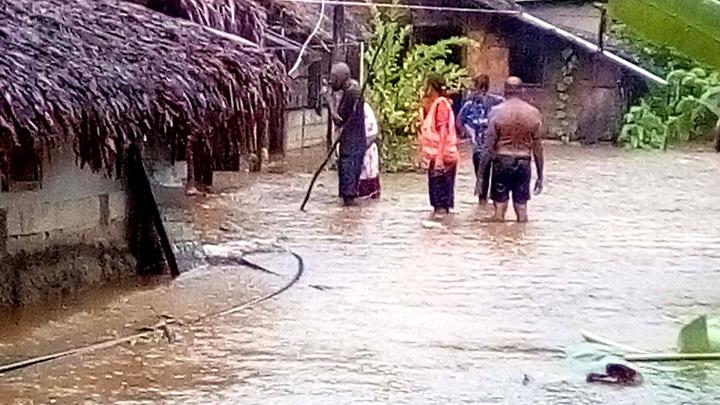 Already there is widespread flooding in Vanuatu as Cyclone Harold nears. Photo: VBTC

Harold, a category four storm, was sitting off the country's west and continuing to strengthen on Sunday afternoon.

The system had slowed to a crawl, said Fred Jockley, a forecaster at the Vanuatu Meteorological Service, a worrying development as a slow-moving cyclone allows it to absorb more moisture, thus gaining size and strength.

On its current track, Harold is forecast to pass directly over the islands of Malekula and Ambrym late on Monday as a powerful and destructive category five storm - the highest category there is - with winds near its centre in excess of 200km/h.

While its path could stray from that forecast, Vanuatu is almost certain to experience some kind of direct hit, with Mr Jockley warning of destructive winds, torrential rains, phenomenal seas, and flash flooding and landslides in several provinces.

"It's very severe," he said. "There's already a lot of flooding, there are already reports of damage to some houses." 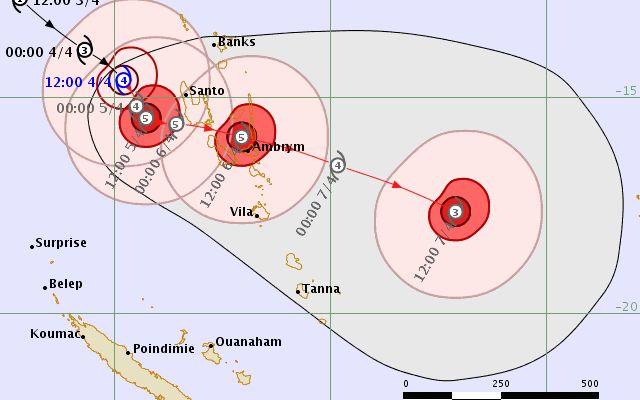 On Sunday, reports from islands in Vanuatu's west - including Santo, the country's largest - indicated that damage had already been done, with people forced to flee villages or find higher ground.

"We are now seeing a lot of rainfall and massive flash flooding," said Manson Taridenga, a disaster official in Penama, one of the provinces in Harold's firing line. "We have already seen some damage to infrastructure like roads."

Pictures shared to social media showed villages on the island of Malekula, which is likely to bear a direct impact, flooded by rivers that spilled over their banks to swallow food gardens, and villagers boarding up huts and tightening thatching on their roofs.

For Vanuatu, the Pacific, and countries that are often called upon for support like New Zealand and Australia, the threat of such a powerful cyclone comes at the worst possible time, as the region contends with the Covid-19 pandemic.

Vanuatu has been in a state of emergency for weeks, with the country in effective lockdown. The border has been closed, and people have been ordered to stay home with gatherings of more than five people banned. 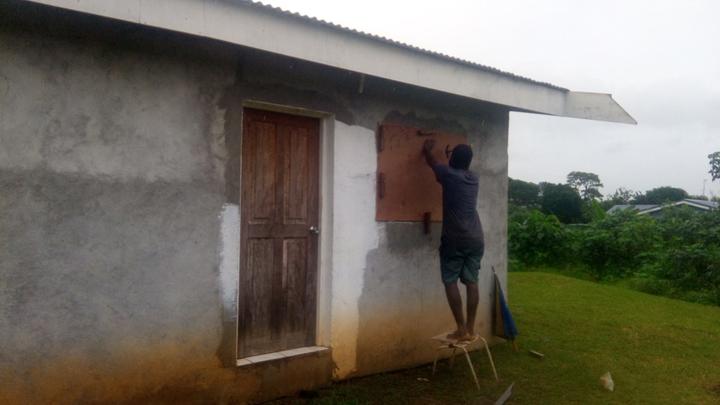 Residents board up houses in Vanuatu as Cyclone Harold nears. Photo: VBTC

But that could prove difficult to maintain if the cyclone is as destructive as feared, with people likely to be forced to move from village-to-village, and others forced to congregate in mass evacuation centres that are already opening across the central provinces.

Faced with the dual emergencies, Mr Taridenga said his officials in Penama had opted to relax the Covid-19 restrictions in favour of protection from the cyclone, allowing people to travel to safer areas and to congregate in mass evacuation centres.

"It's a lot of worry," he said. "We are in a state of emergency for the [coronavirus] now we have to prepare for these two things."

Describing the arrival of Cyclone Harold as "bad timing," Mr Taridenga said the decision was helped by the fact that Vanuatu had no confirmed cases of Covid-19.

"Currently we focus on the cyclone," Mr Taridenga said. "We won't worry about the coronavirus since our border ban and we don't have confirmed cases in Vanuatu at the moment."

This cyclone comes just over five years since Cyclone Pam caused extensive damage across Vanuatu. In many areas, the rebuild is still underway.

Mr Jockley said while Cyclone Harold was very powerful, it doesn't have the spread of Pam. "I think this system is quite small compared to scale at which Pam was," he said. "This one is a very compact system."

Mr Taridenga's province, Penama, also includes the island of Ambae, which was forced to evacuate entirely after a volcanic eruption two years ago, and people have only just started to return.

As he spoke from his office on Sunday, the skies above were blackening, the rain coming down in a heavy pelt. In just a few hours, his disaster officials had switched from planning one disaster to planning for another.

Supplies were prepositioned and evacuation centres were being opened as the menacing storm sat over the horizon.

"We're ready to face another disaster," he said.