A man formerly detained on Manus Island has warned the United Nations that other countries are "copying" human rights abuses perpetrated by Australia. 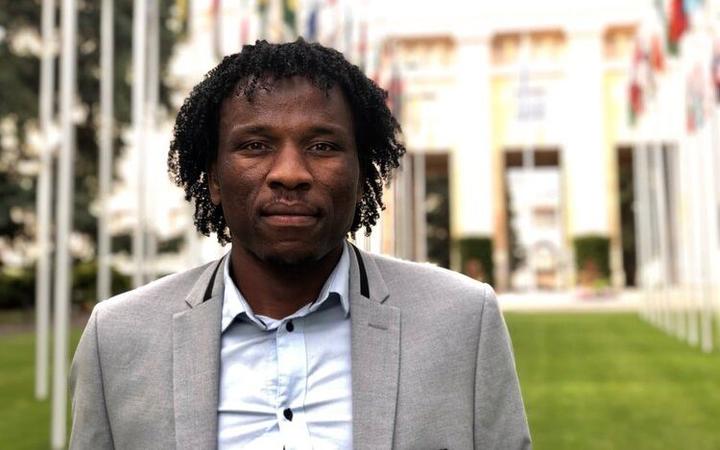 Abdul Aziz Muhamat, who was granted asylum in Switzerland last year, has just returned from witnessing "suffering" at refugee camps in Greece.

He told the UN Human Rights Council that Australia should be held accountable for indefinitely detaining refugees in PNG and Nauru, a model he said was now being emulated.

"The Australian government must not be allowed to detain people indefinitely because now other countries are copying the human rights abuses of Australia," Mr Muhamat said.

"Each day it gets worse for the vulnerable people still detained by the Australian government on PNG and Nauru. Human beings are being destroyed, physically and mentally. Twelve people have died.

"This is a humanitarian crisis that requires urgent action. I am asking the UN and the international community to demand the Australian government act humanely," Mr Muhamat said.

About 230 refugees remain stranded in PNG and 210 in Nauru.

Mr Muhamat was speaking on behalf of Australia's Human Rights Law Centre whose legal director, Edwina MacDonald, called on the Scott Morrison government to end the suffering of people it held indefinitely.

"The Australian government continues to act with breathtaking hypocrisy, claiming to support human rights at the UN while indefinitely imprisoning men and women in offshore detention camps," she said.

"These people - imprisoned for fleeing the same atrocities this government comes to the UN to condemn - have now been detained for nearly seven years.

"No government can truly stand for human rights while choosing to severely damage the lives of innocent people."

On the situation in Greece, Mr Muhamat accused political leaders of silence - "as if nothing had happened".

"I have seen the suffering of people forced to flee their homes," he said. "They have no safety, no food, no electricty, no shelter, no medical treatment.

"Greece shouldn't be left alone to deal with this... all countries should show compassion and share their common responsibility."