An American Samoa-born presidential hopeful has appealed to Democrats in the US territory to vote for her to be the party's presidential nominee at the national convention. 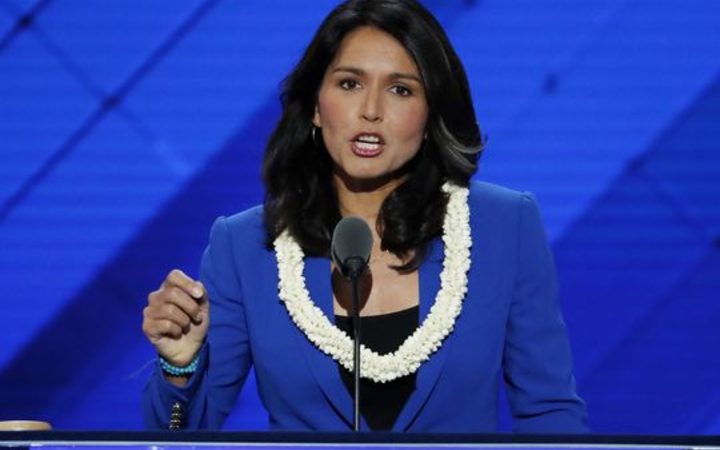 Amnerican Samoans are not eligible to vote in the US presidential elections, but party members can vote in the primaries.

Tulsi Gabbard gave a hearty 'talofa' at the start of an online video in which she also gave thanks to Le Atua or God for sparing American Samoa during recent tropical storms.

Her father Mike Gabbard, now a Hawaii state representative, was a teacher at the American Samoa Community College, while her mother was a speech therapist at the Department of Education.

Gabbard said some would remember her grandmother Pako Gabbard's tasty pies, which were sold from her seaside store at Leloaloa.

A member of congress for Hawaii, she is also a member of the Hawaii National Guard, and did two tours of Iraq where she served alongside reservists from American Samoa.

Gabbard said she knew the price of war and as commander in chief would stop wasteful spending on conflict.

Campaigners for US presidential hopeful and current Democratic senator Bernie Sanders are using social media to reach out to voters in American Samoa to support him.

Tomorrow, the American Samoa Democratic Caucus holds its gatherings, as part of the nation-wide Super Tuesday.

Mr Sanders' campaign team has been sending text messages to people in American Samoa urging them to support "Bernie 2020".

They pointed to victories in primary elections in Iowa, New Hampshire and Nevada, claiming he'll beat US president Donald Trump in the November general election.

In the weekend messages to American Samoa voters, the campaign said Mr Sanders had spent his entire life standing up to the greed and corruption of the corporate elite and fighting for working people.