A tropical cyclone warning remains in effect for all of Samoa. 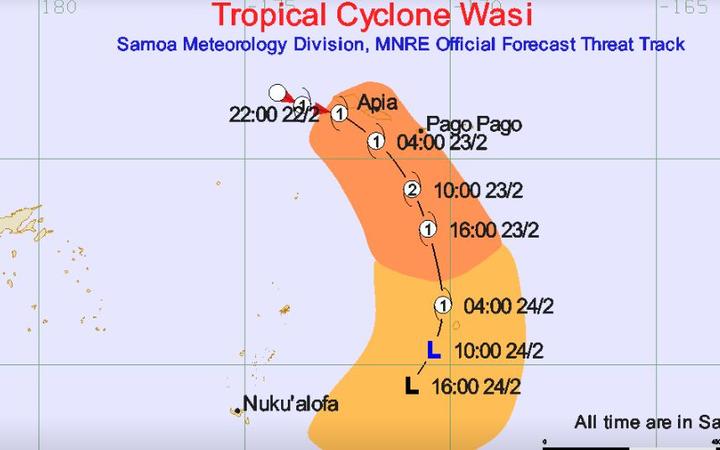 "Heavy rain warnings remain in effect for Samoa; landslides are possible for vunlerable areas," according to the Samoa meteorological service.

Tropical Cyclone Wasi is slow moving east southeast at 12km/hr with winds close to the centre at 83kph.

The National Emergency Operations Centre will take the lead on all national coordination and national response in regards to Tropical Cyclone Wasi, in collaboration with all Emergency Response Agencies.

It is the second cyclone in two days to have formed in the same area.

At noon yesterday category one Wasi was located to the northwest of Apia and moving southeast.

Wasi is expected to pass Samoa, intensifying to a category two storm as it moves to the southeast towards Niue.

It is not expected in Niue's waters under late on Sunday.

That island is still feeling the effects of now ex-cyclone Vicky, which was downgraded by forecasters Saturday morning, and has moved to the south of Niue.

Both Samoa and Niue are expected to receive damaging winds and extensive rain with extensive flooding expected on Samoa.

Seas in the area affected will be rough to very rough with winds of up to 55 knots.

Schools were closed on Friday (Saturday NZT), and an Air New Zealand cancelled today's flight to the island.