Vanuatu's caretaker prime minister denies that his government made extra concessions to China.

As Vanuatu prepares for its general election next month, Charlot Salwai is taking stock of being one of the few Vanuatu prime ministers to have lasted a full parliamentary term in power.

During the four-year term, the his coalition government signed Vanuatu on for co-operation under China's Belt and Road Initiative. Several infrastructure projects also began or were completed with Chinese funding.

However, analysts warned that one of these projects, a wharf in Luganville, could be later used as a Chinese military installation if Vanuatu failed to meet its repayment obligations.

A recent Lowy Institute report identified Vanuatu as one of the countries most heavily indebted to China.

Vanuatu's opposition leader Ishmael Kalsakau accuses the Salwai government of compromising the country's sovereignty through its relationship with China.

"It's got more to do with our inability to govern than with the influences of a hegemonic power," Mr Kalsakau said.

However, Mr Salwai claimed that Vanuatu's relationship with China was no different to those with other development partners.

"We are doing our best to maintain our relationship with all those we have diplomatic relations [with], so all international organisations and all development partners who are supporting us," he said.

"So we don't do something very special only for China. We do the same with all countries." 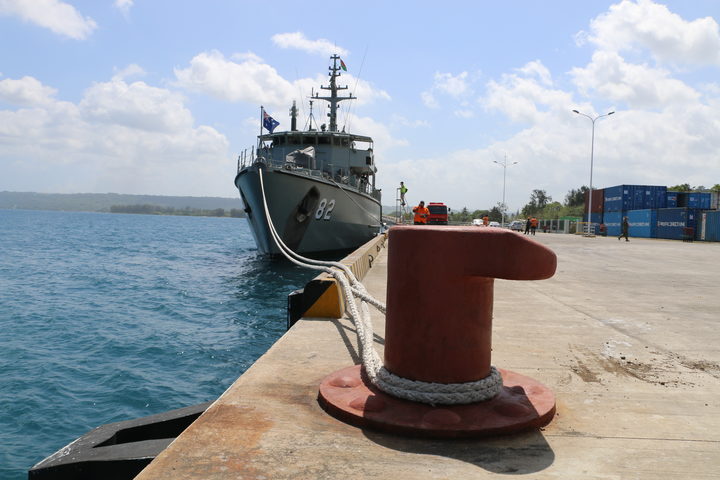 With the election fast approaching, Mr Salwai has the unwelcome distraction of a charge of perjury hanging over his head.

He is due for a court appearance next week, and has expressed confidence that the court would dismiss the charge, clearing the path for him to contest the March election.

The charge stems from a controversial move by the Salwai government to introduce parliamentary secretaries - paid government positions that the Supreme Court last year ruled 'void and of no effect'.

Mr Kalsakau filed the original complaint against Mr Salwai, accusing him of using the positions to shore up his support while misusing public funds for the salaries.

He argued the Prime Minister committed perjury when he asserted that the creation of the secretaries positions was endorsed by the Council of Ministers.

But Mr Salwai said the Council of Ministers had made a resolution to this effect in 2013 under former prime minister Sato Kilman.

"Because we have all the orders that have been prepared by the State Law Office back in 2013. If we have orders, I believe that there should be a Council of Ministers decision to create the position."

As has been the pattern for many years in Vanuatu, the next election is likely to result in another fragmented parliament with no one party dominant.

None of the major political parties are standing candidates in more than half of the 52 electorates.

Mr Kalsakau, who is the leader of the Union of Moderates Parties, said a fragmented parliament was not in itself a problem.

"I believe in Vanuatu we've been able to cope with the fragmentation. It's just the question of corruption that we need to address quite seriously," he said.

Mr Salwai, the leader of the Reunification of Movements for Change party, faced various challenges to his coalition government's rule over the past four years.

He defeated several motions of no confidence directed against him, while reshuffling cabinet and reconfiguring the coalition. But to some of his critics, the stability the Salwai government forged came at the expense of reform it promised but couldn't deliver.

However, Mr Salwai said that valuing human relationships, and the ability of MPs to work together, was the key to a functional government in Vanuatu.

"According to what we can hear and see on the field, and during this preparation for this election, it looks like very strongly that it will be a coalition government," he said.

Mr Salwai noted that while no one was perfect, the 52 MPs were all bound by a common aim: to serve Vanuatu.