A vision of the Pacific united against corruption has been released from last week's first Pacific Regional Anti-Corruption Conference in Kiribati. 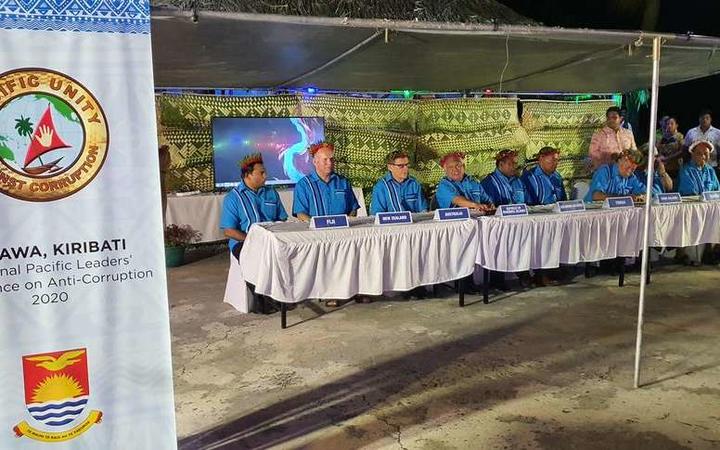 The conference was attended by the president of Kiribati, the prime ministers of Samoa and the Cook Islands as well as ministers and anti-corruption officials from across the region.

She said the leaders' conference and its vision statement were the culmination of the project's eight year existence.

"We've had many regional workshops and conferences but not where we've been able to have Pacific leaders, ministers and anti-corruption champions at the same table. It really was the initiative of the [Kiribati] President to do this," Ms Wythes said.

Expanding on the conference's theme of Pacific Unity Against Corruption, the Teieniwa Vision is a statement of goals and principals for the project's 14 Pacific countries to aspire to.

Ms Wythes said the vision could be "beautifully summed" up by its second line: Commit to Pacific Unity Against Corruption, recognising that all of our progress and aspirations for a peaceful, harmonious and prosperous Pacific cannot be realised unless we address corruption.

"That is really key in this vision and it really encompasses a lot of the challenges, a lot of the achievements but also the failures the leaders and anti-corruption experts were talking about," she said.

The vision also endorsed a holistic approach to tackling corruption in all levels of society and "developing and maintaining independent integrity bodies".

A "commitment to combat money laundering" was mentioned as well although "asset recovery" had not come to the forefront yet, Ms Wythes said.

While the vision might only provide a set of moral obligations for Pacific leaders, it encouraged them to govern in an "accountable manner wherein all leaders, persons of authority, cabinets, parliamentarians and public servants adhere to their leadership codes and or codes of conduct," she said.

A milestone was marked at the conference when Tonga announced its accession the United Nations Convention against Corruption, the last the 14 countries in the group to do so.

The project itself concludes its second four-year term in 2020 but had been funded for a third with about $US5.4 million from the Australian government.

"And we're currently in negotiations with the New Zealand government. We hope that they also seek to come on board going forward."