With Majuro hospital wards overflowing with dengue fever patients, a US volunteer medical team has arrived to bolster the hospital's treatment programme. 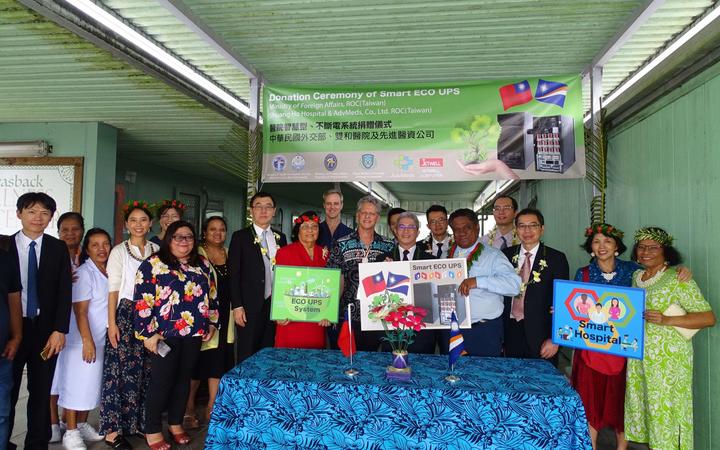 Taiwan government officials join with Marshall Islands Ministry of Health and Human Services representatives earlier in January for one of many donations Taiwan has provided in recent months in support of Majuro hospital services. Photo: Hilary Hosia

An AmeriCares medical team of one doctor and several nurses arrived earlier this week to work at Majuro hospital, with additional medical personnel from the US-based volunteer organization expected to follow next week.

"They are here to help support our health care workers to deal with the Dengue Ward and emergency room, which are overwhelmed almost every day (with dengue cases)," said Secretary of Health Jack Niedenthal.

Taiwan and other donors have been assisting by providing medical supplies to help resupply the hospital that has seen many basic medical supplies dwindle in the face of thousands of dengue cases.

The Marshall Islands has been in a state of health emergency for six months in response to the dengue outbreak that got started in Ebeye Island last July. While Ebeye has seen no new cases in two months, the number of cases in Majuro continues at what Niedenthal described as an "astounding" pace.

During the past seven days, Majuro hospital saw 160 dengue patients, an average of 23 per day.

Over 2,300 confirmed and suspected dengue fever cases have been seen in the country since last July, with the vast majority in Majuro. Cases have also been identified on six remote outer islands, particularly since the government ended the ban on outer islands travel in mid-December. Majuro has accounted for 1,962 of the total cases, reported the ministry earlier this week.

While the six-month long dengue outbreak, coupled with an influenza outbreak in November and December, has stressed Majuro hospital staff and resources, an official from the US Centers for Disease Control praised the Ministry of Health and Human Services for a "heroic" response.

"My appreciation from afar for the amazing work you and your team have done, especially this past six months with the prolonged dengue outbreak," said Richard Brostrom, a senior advisor with the Atlanta, Georgia-based Centers for Disease Control, in an email with Niedenthal this week.

"Your efforts are locally heroic, positively integrated with external attempts to provide some assistance, and serve as an example for others in the Pacific."

Brostrom praised the data reporting by the ministry. The "capacity to collect, organize, and share the ongoing outbreak situation report is the best I have seen in 24 years of working in the islands. Let's hope the dengue outbreak ends very, very soon".

As the dengue outbreak picked up last September, Majuro hospital set up a dengue ward, where patients are cloistered, staying under mosquito nets to prevent spread of the illness.

On one day earlier this week, there were 44 dengue fever patients in Majuro hospital, taking up half the bed space in the hospital.

Niedenthal said they had 17 patients in the dengue ward, 12 in the emergency room with only 10 beds available, five in pediatrics, and 10 in the medical inpatient ward - a situation he said is a daily norm over the past few weeks as dengue patients have packed the hospital in Majuro.