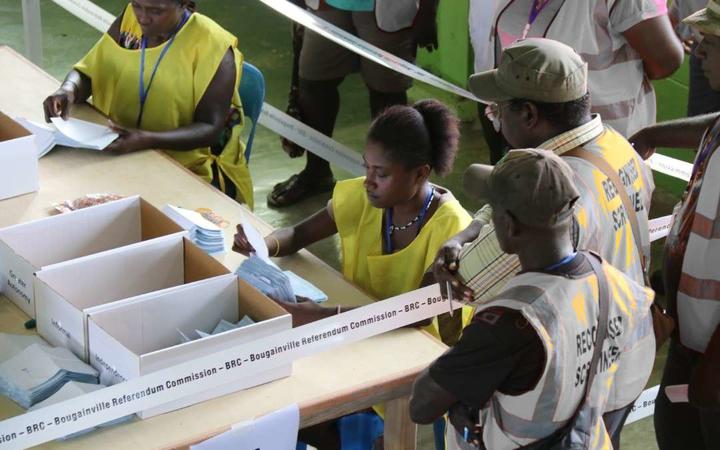 In the result announced yesterday, a 97.7 percent majority voted for independence in the autonomous Papua New Guinea region's non-binding referendum.

Mr Marape said his government had heard the voice of Bougainvilleans.

Praising the "excellent" conduct of the referendum, he said the next stage in the Bougainville peace process would now begin.

To come into effect, the referendum result must be ratified by PNG's national parliament.

First, the PNG and Autonomous Bougainville governments are to conduct consultations on the result and its implications.

The consultations will begin early in the new year, according to the prime minister.

Tomorrow, he is to travel to Arawa in Bougainville, where he's expected to deliver a speech and sign a joint statement with Bougainville's president, John Momis.

It's unclear how long the consultations will take, and transition to independence for Bougainville is still not guaranteed while that process is incomplete.

The long-anticipated referendum was the ultimate provision of 2001's Bougainville Peace Agreement which followed a protracted civil war.

He said both governments would continue to adhere to the guidelines of the Peace Agreement, which did not determine a time frame for the consultation process.

"For the rest of Papua New Guinea, this is a big, big result. This is a transformational political announcement, and therefore please allow the rest of PNG sufficient time to absorb the result."

Sir Puka said he wouldn't present the result to the parliament until after consultation has taken place.

But Mr Ahern, a former Irish prime minister, said it was also important that the people of Bougainville see immediate action.

"Not on the issue of independence, because that is not going to happen quickly," he explained.

Sir Puka said that while he and other political leaders negotiated over the result, budget support for Bougainville would continue.

"The government led by the prime minister James Marape is committed to continue to provide fiscal assurance to the peple of Bougainville.

"It is incumbent on all of our leadership to make sure that ordinary Bougainvilleans, ordinary Papua New Guineans continue to be provided the basic goods and services throughout the entire process."

The President of Bougainville John Momis and Prime Minister Marape are due to meet in Arawa on Bougainville on Friday to start the consultation process.

The governments of both New Zealand and Australia, which both contributed manpower and materials to the referendum, have congratulated Bougainville on the vote being successfully conducted.