There have been another five deaths in Samoa's measles epidemic, bringing the toll to 53. 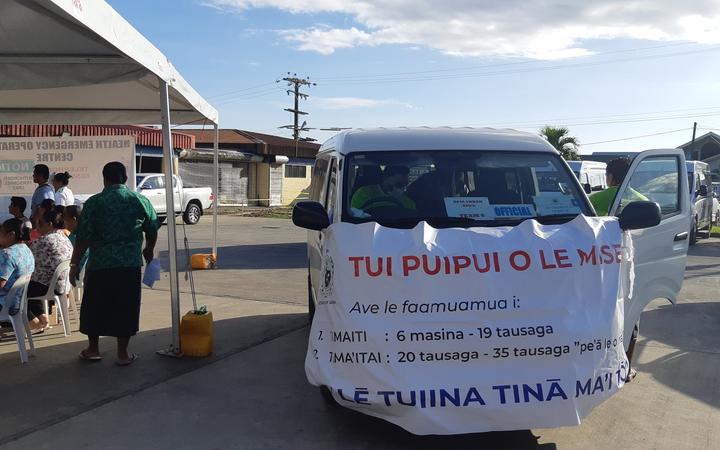 One hundred and eighty-three people remain in hospital, including 19 critically ill children.

Samoa is racing to immunise its entire population and today authorities expanded the ages of those eligible for vaccinations.

Breaking: FIVE more children in Samoa have died, the measles death toll at 53. Total cases over 3,700 with 198 new cases overnight.

Just spoke to Fala'i and Lupino who lost little Soane. They're grieving & said the most beautiful things & made us cry too. #SamoaMeasles

Previously, the vaccines were being prioritised for everyone between six months and 19, and non-pregnant women up to 35 years old.

Researchers at the University of Auckland last week developed a model that predicted the epidemic would hit a peak of around 70 deaths.

The assessment is consistent with officials and medical experts who have warned the worst is yet to come.

"It's a bit scary to travel to Samoa at the moment," he said, adding that many Samoans living in New Zealand had cancelled their planned trips back home for the holiday period.

Others were leaving their children behind fearing it was not safe for them, he said.

Globally, measles in on the rise.

According to the World Health Organisation, cases were up 300 percent in the first three months of this year, compared to 2018.

Last week, it said anti-vaccine misinformation contributed to the epidemic in Samoa.

Houston's Baylor College of Medicine professor Peter Hotez said the anti-vaccine movement has made inroads globally through the use of social media and online commerce, including in Samoa.

"The anti-vaccine movement is really being allowed to run unopposed, and so there's been no substantive efforts to counter it and to respond to it and really to either take it down or respond to it with heightened vaccine advocacy," he said.

Dr Hotez said if measles was left unchecked, it could reverse global gains in public health.

Bloggers like Australia's Taylor Winterstein have seized on the epidemic to falsely label vaccines as dangerous. Ms Winterstein has denied she is anti-vaccination and, instead, insists she is advocating "vaccine injury awareness" and "informed consent".

"We have seen in around the world, a bit of an uptick in people making all sorts of claims about supposed dangers of vaccinations," Alison Campbell, a senior lecturer in Biological Sciences at Waikato University said.

Meanwhile, French Polynesia is sending another medical team to Samoa to help with the measles crisis.

The government said 10 health professionals from Tahiti would take 260kg of supplies with them.

They would take care of the ill, and help relieve those assisting who needed rest.

An initial team was sent from Tahiti at the beginning of the epidemic, after Samoa sought international assistance.

And the wait for the measles vaccine continues for thousands in Fiji.

There are now 14 confirmed cases in Fiji.

About 200,000 vaccines, which were earlier due to arrive in the country two weeks ago are expected to arrive this week, according to the Ministry of Health.

The ministry did not say what had caused the delay.

But it said the measles vaccine was only being administered to priority groups, residents of Serua-Namosi, children aged between six months and three years, and people travelling overseas.

The Defence Force has sent two aircraft to Samoa to assist with its measles epidemic.

A delivery of a Hercules C-130 on Friday came after an urgent request from the Ministry of Foreign Affairs and Trade, as the death toll in Samoa continues to rise.

The Hercules C-130 took with it an oxygen generator and oxygen compressors, condensers and bottles.

It also made a stop in Fiji to pick up 50,000 measles and rubella vaccines UNICEF is sending Samoa's government.

On Monday, a Defence Force Boeing 757 took 2700 kilograms of medical supplies to Samoa.

Rear Admiral Jim Gilmour said the Defence Force was working closely with the Foreign Ministry to assist in Samoa.

New Zealand has sent dozens of nurses to Samoa to assist in its mass vaccination campaign and more than 100,000 measles' vaccines.