There were goals galore on the opening day of the Oceania Futsal Nations Cup in New Caledonia yesterday with the scorelines hitting double figures in three of the four matches played.

Defending champions Solomon Islands got the tournament off with a hiss and a bang notching up 13 points against a valiant Tongan side who did their best to frustrate the Solomon Kurukuru and managed to bag two goals of their own, with the final score there 13 - 2 in Noumea. 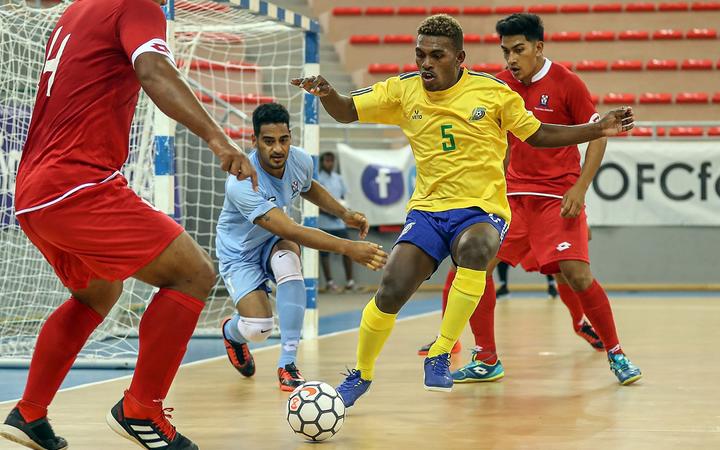 In his post match interview with OFC media, the Solomon Kurukuru's coach Vinicius Laite said he was happy with the boys performance but believed the scoreline should have been higher given the number of chances created but he put that down to opening night jitters.

"The result is what we have expected of course, but we got too excited at most of the times and our finishing also let us down, we have created probably 50 chances if we had converted 50 percent of them we would have won by a scoreline of 25," said Laite.

"I'm happy with the players' approach to the game, the first game is always getting over that excitement and anxiety as well and now that it's done and dusted with a positive result and we can always build up on that," he said.

In the other matches on Monday, Tahiti beat Fiji 11 -1, the hosts New Caledonia beat Vanuatu by an identical scoreline 11-1 and New Zealand were the only team to keep a clean sheet beating American Samoa 9 - 0.

While in Group B, Solomon Islands will take on Tahiti and Tonga will play Fiji.

As well as regional bragging rights, the winner of the competition will take home Oceania's only spot at the FIFA Futsal World Cup next year in Lithuania.

In the Futsal code, Solomon Islands have had a stranglehold on the regional title this past decade representing Oceania at four consecutive FIFA Futsal World Cups.

However, the gap between the Kurukuru's and some of their regional opponents like Tahiti and New Zealand has got smaller and smaller with each tournament.