The Papua New Guinea men's cricket team have sealed a historic place at the T20 World Cup after beating Kenya by 45 runs to finish top of their group at the qualifying tournament in the United Arab Emirates.

Norman Vanua was the hero for the Barramundis, scoring a career-best 54 off 48 balls as the Barramundis recovered from a disastrous start to post 118 all out before claiming 2 for 19 with the ball as Kenya were dismissed for just 73 in reply. 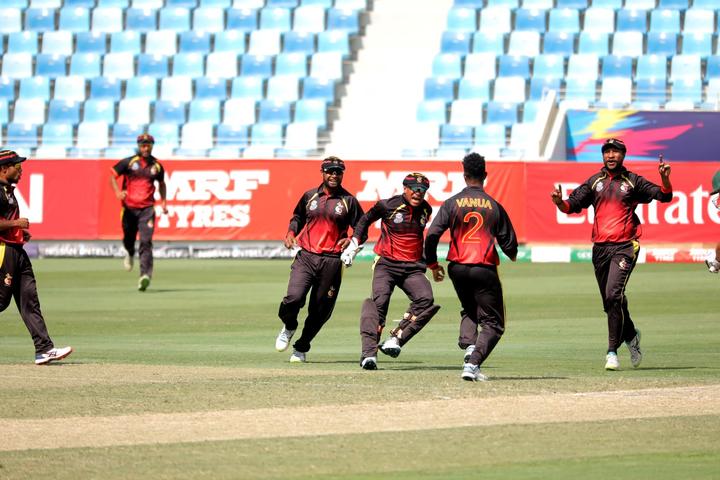 "The boys have worked really hard for this and we have talked about it and worked towards this for 18 months and for them to finally achieve it is really special and I am very proud to be a part of it," Joe Dawes said.

At one point today PNG were 19/6 against Kenya, with their hopes of qualifying automatically for the #T20WorldCup rapidly fading before their eyes.

An inspired comeback and a nervous wait later and they're going to Australia.

Speaking to SABC shortly after qualifying the Barramundi's captain Assad Vala was all smiles.

"I just cant express what we are feeling at the moment. We worked really hard to get where we are. Really happy for the boys and the staff everyone back home who have supported us. We came in not in good form but the way we played all throughout the week has been outstanding and credit to the boys," said Assad Vala.

After being put into bat, PNG slumped to 19 for 6 after four overs and coach Joe Dawes admits he feared the worst.

"At 6 for 19 today I thought we might have had a bit of work to do but that is cricket and in particular 20 20 cricket and to comeback from that is a really good sign of this group that fights and never gives up and to be honest they just love playing for each other and they love playing for their country," said Joe Dawes.

But Norman Vanua combined with Sese Bau (17 off 33) for a crucial 77-run seventh-wicket stand to ensure PNG posted a competitive total before the bowlers combined to skittle their opponents inside 19 overs, with Vanua (2 for 19), Nosaina Pokana (3 for 21), Damien Ravu (2 for 14) and Assad Vala (3 for 7 from four overs) all starring with the ball.

"Norman was outstanding and we have been challenging him for a long time to stand up and be a senior player and for him to do that today was awesome for his country but [also] just awesome for him and his confidence and the hardwork that he has put in," Dawes said.

PNG finished with five wins from six games to secure automatic qualification ahead of the Netherlands, thanks to a superior net run rate.

The Dutch beat Scotland by four wickets in their final group match but were unable to reach their victory target in 12.3 overs, which would have displaced PNG atop the Group A standings.

Joe Dawes admits it was a nervous watch.

"It was nerve wracking especially when Ryan ten Doeschate's belting sixes there for fun but we knew they would have to be batting extremely well to get it in 12.3," Dawes said.

Meanwhile Ireland will join PNG in Australia next year after securing automatic qualification from Group B.

With their World Cup places secured, Papua New Guinea and Ireland have earned a few days off before they return to action in the semi finals in Dubai on Saturday.