More than a year after the MV Butiraoi broke apart and sunk in Kiribati, killing 95 people, grief and anger still run deep on Nonouti, the island from which that fateful voyage departed.

Only two hours after it left, the main support beam gave way and the wooden catamaran collapsed in on itself. Ninety-five people were killed, and seven survivors were rescued 10 days later.

This week, the government released a Commission of Inquiry report into the disaster, but that has done little to ease the anger held by victims' relatives.

One of the island's MPs, former president and current opposition member Sir Ieremia Tabai, said people were demanding action: "I know they are bitter and they want something done."

Former longtime MP Patrick Tatireta, who's now an advocate for some of the families, said the pain was still raw.

He told the story of the man whose wife, daughter and son were on that boat, who now spends his days alone, walking the length of the island.

Mr Tatireta said the island of 2000 had many stories like that.

"You can feel that emptiness, you can see that hollowness in his eyes. He still wants something, not compensation, he wants something to be done for the deaths."

The Commission of Inquiry report laid bare a tragedy that should never have happened.

The Butiraoi was severely overloaded, but it wasn't permitted to carry passengers; the captain ignored weather warnings and didn't tell anyone his intentions, he refused to turn around in rough weather, and he switched off the generator that powered the radio.

The ship had no locator beacon and not enough lifejackets, and when tragedy struck, both inflatable liferafts failed, leaving people scrambling for two aluminium dinghies, one of which capsized.

While the inquiry laid much of the blame with the captain, crew and the ship's owners, Mr Tatireta said the government failed in its regulatory duty, and should shoulder some of the blame.

"The thing is, has this government done anything to upgrade the standards of the vessels? Are the boats safe? They're still not safe.

"You can still see the boats going in and out of the harbour without proper equipment. It's very sad." 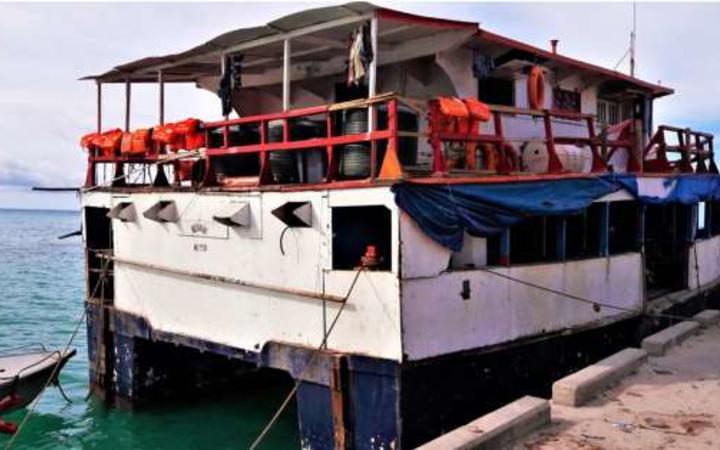 The MV Butiraoi was severely overloaded and structurally compromised when it sank in 2018, killing Photo: Supplied / Government of Kiribati

The report was released this week after months of public pressure, first in hard copy at the president's office or the national library on the main island, Tarawa, and now online.

But Sir Ieremia said that was useless in Nonouti, where many relatives had been unable to see the findings.

The seven survivors had been paid compensation, Sir Ieremia said, but none of the relatives had, which they were now demanding.

And Mr Tatireta said while he welcomed the report's release, there were still plenty of questions that needed answering.

Police have also been approached for comment about their inquiries, and so has the Abemama Island Council, which owned the Butiraoi.