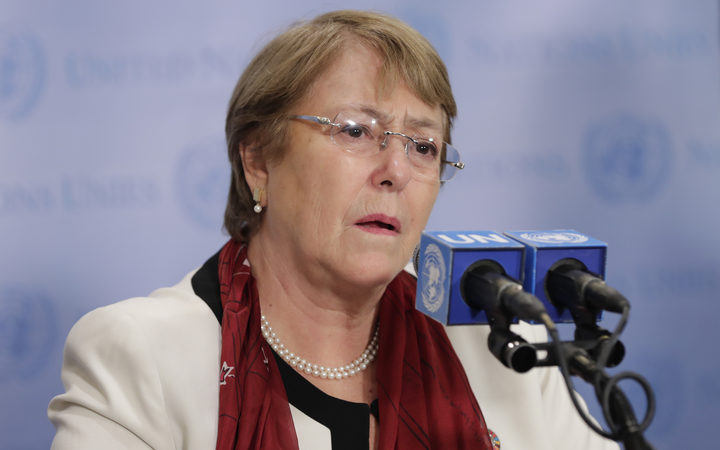 The commissioner said mandatory detention was a mainstay of Australia's migration and asylum system.

"The people it affects have largely committed no crime; many of them are in very vulnerable situations, and some are children, yet they are subjected to prolonged, indefinite and effectively unreviewable confinement," Ms Bachelet said.

"This includes those who remain in the offshore centres such on Nauru and Manus Island. We have a wealth of evidence to demonstrate the harmful effect this has on their mental and physical well-being."

Australia should make greater use of alternatives to detention, which are non-custodial and community based, she said.

"I know that Australia's asylum and migration policies have become entrenched over the years by successive governments. But I strongly believe that we are at a point now where it is time to roll back these policies, or at least mitigate their worst effects," Ms Bachelet said.

"I encourage Australia to make greater use of human rights-compliant alternatives to detention, which are non-custodial and community-based. Evidence demonstrates that these alternatives reduce the distress and harm caused to people; increase the likelihood that migrants will comply with immigration decisions; and are often a significantly cost-effective alternative to expensive infrastructure designed for detention."

The commissioner also weighed in on the debate over the medevac law which makes it easier for those detained offshore to access medical care in Australia.

"The so-called 'Medevac Law' that came into effect in March this year is another example of the practical improvements that can be made to the asylum system to uphold international human rights obligations and mitigate the harmful effects of detention," Ms Bachelet said.

"I am concerned that the plans to repeal this law may mean more - and costly - court battles, with lives being put at risk. I appeal to Members of Parliament not to reverse these small steps of progress that have been made."

The government hopes to repeal the medevac law passed before May's general election when it held a minority of seats in the lower house of parliament.