Tonga's National Rugby League is launching legal action against the government following its suspension by the international governing body.

On Thursday the Rugby League International Federation suspended the TNRL pending a full investigation into issues raised by a number of parties.

The move came after Tonga's then-acting Prime Minister Semisi Sika told the federation the TNRL had lost the trust and support of its members, clubs and players.

Earlier this month the TNRL sacked popular coach Kristian Woolf over disagreements around control and finances which led to a group of players, including Jason Taumalolo and Andrew Fifita to threaten a boycott of the country's upcoming internationals.

TNRL Secretary William Edwards dismissed suggestions the body had lost support of the clubs and the community.

He said a meeting was held the day after Woolf was sacked and 16 of the 22 clubs represented backed the move.

"So you tell me where did they get off saying we didn't have the support of the clubs?

"If we didn't have the support of the clubs, the clubs would not have allowed us to dismiss Kristian Woolf," Edwards said.

After announcing the suspension, the RLIF said it would work with the Tongan government and key stakeholders to create an interim arrangement.

RLIF chair Graeme Thompson said it had received representations and concerns from the Office of the Prime Minister of Tonga, the Tongan Sports Council, the RFL, the ARLC, the RLPA on behalf of leading players and from concerned groups in Tonga.

"In view of the considerable evidence that the interests of international rugby league were not being best served at this time.

"The RLIF Board voted unanimously that the TNRL's membership be suspended with immediate effect while these matters are properly investigated," he said.

"The RLIF, at the request of the Tongan government will work with the Tongan Sports Council to ensure that the forthcoming international calendar is not undermined."

However William Edwards pointed out the Tonga Sports Council Act which forms the basis of the council's existence, limited its authority over other national sporting organisations.

Semisi Sika, whose letter to the RLIF sparked the suspension, was also president of the previous TNRL administration which was replaced by Supreme Court order because of financial mismanagement.

Edwards and his board colleagues were then elected earlier this year.

"What you have is a group of indignant people who do not have the support of the clubs making false statements to the public and angering the clubs that have been with the Tonga National Rugby League since 1988."

Edwards said a legal claim would be filed today.

"I will end up proving that the TNRL has sovereignty to govern," he said.

"I am not going to let someone interfere with someone's sovereign right to govern merely because of public perceptions.

"It's about standing for what is right, nothing to do with Andrew (Fifita) or Jason's (Taumalolo) views on how they feel on anything," Edwards said.

"The issue is what's the truth and what's right." 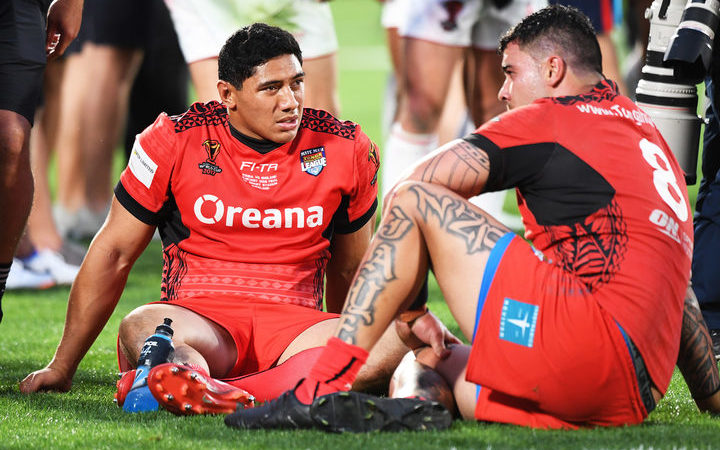 The legal claim stated the Government of Tonga, by its acting Prime Minister, interfered unjustly by removing authority from the legitimate governing body for rugby league in the country.

It also indicated the move interferes with contractual relations that have been developed through the TNRL.

Edwards was disappointed at the RLIF move.

"I would have thought that they would have accorded us natural justice by providing us (with) allegations and asking us to answer it."

However he refused to give up his fight and step aside as some players had requested.

"If the court proves me right that Mr Sika acted unlawfully, then why should I step aside?"