For the 10th anniversary of the tsunami that killed 180 people across Polynesia, RNZ Pacific's Dominic Godfrey returned to the Samoas to see how his ancestral home lands had recovered...

First Person - The email came through from the US Geological Survey shortly before RNZ Pacific's 7am news bulletin. It revealed a massive quake off the Samoas. 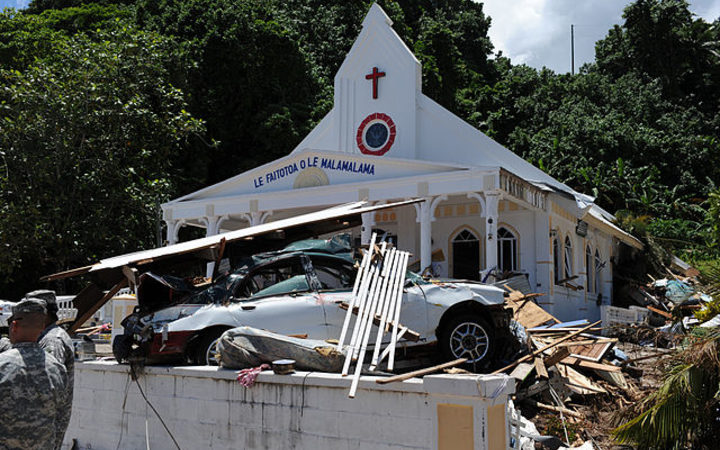 Damage from the 2009 Tsunami in Samoa Photo: Supplied

By the time we confirmed the quake and its severity, then started getting warnings to air, tsunami waves were already making landfall.

The 8.3-magnitude quake that powered them was the strongest on the planet that year.

News quickly started coming through about the 15-foot waves and their devastating impact. And of the first casualties. For a Samoan New Zealander, with family and village affiliations on the south coast, it became a waiting game.

Samoa suffered the worst with 149 deaths, while American Samoa and Tonga lost 31 and nine lives respectively.

The first confirmed death was that of Tui Annandale, the wife of my cousin Joe. I hadn't seen her since my sister's fa'aipoipoga, a wedding full of family and joy.

Samoa had always held the happiest place in my memories and I tried to get there every couple of years. After the tsunami I stopped going home.

That was until this year. 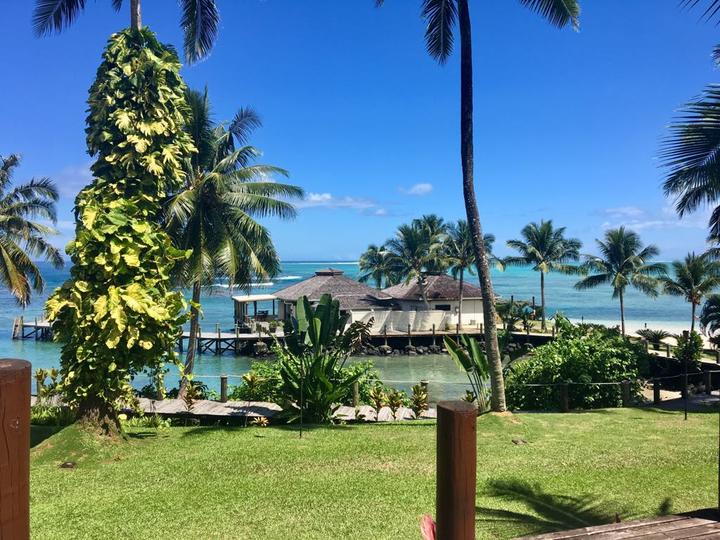 My first stop was to see Joe at his south coast hotel, the beautiful Sinalei situated just west of Siumu at the base of Upolu's cross-island road.

The resort was one of many in the path of the waves that day, a truth hard to reconcile ten years later in what were again such idyllic and perfectly manicured surroundings.

However, I noticed the pavilion over the lagoon - where my sister was married - had been replaced by a newer, somewhat grander affair.

It was a difference I was to notice throughout Samoa; newer and somewhat grander.

Tuatagaloa - Joe Annandale's chiefly title from the village of Poutasi - said the last decade had been good to the whole Falealili district.

Facing the prospect of the 10th anniversary, he told me he wanted to think about what had happened since and what it all meant. He recalled a Samoan proverb about dealing with disaster and tragedy, and how it spoke of the ability to learn from adversity and doing better for yourself and others.

"Out of this catastrophe, out of this trauma and drama has come all these wonderful blessings."

One of those blessings was the support received from outside the country, according to Tuatagaloa, who referenced the Poutasi Memorial Hall.

"That hall was built by dear friends of ours, Locky Mulholland in particular and there are others as well, who came after the tsunami and asked if there was anything they could do to help," Tuatagaloa explained.

The Wellington businessman mobilised an army of support.

They rallied and raised money "and we built the hall", which Tuatagaloa said brought the village and district together while providing a venue for conferences and other gatherings.

"With the help of my Canadian friends we've built a community kitchen there as a training kitchen, promoting good health, good cooking, and healthy living," he said.

Another to help was Stephen Tindall, founder of the New Zealand retail giant The Warehouse which has many staff from Samoa. 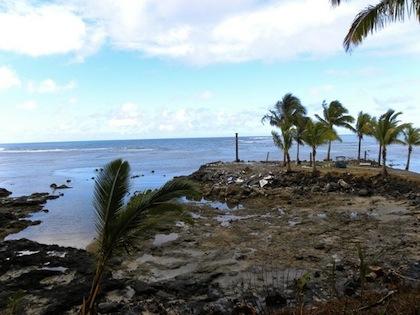 "They came and funded our community gardens, producing salad greens for the hotel and restaurant market," Tuatagaloa added.

This became the cash cow which led Poutasi's initial recovery and has since provided start-up finance for other projects.

But it was the compassion that was uplifting, Tuatagaloa said. "(It) took our minds off what was weighing on us at that time."

The recovery was further assisted by the Baptist Church, which helped to finance and develop the local primary and pre-school which has seen its role grow from 15 to 130 students.

The facility also provides training programmes for the community "which is empowering to our women and our men" he said.

Many of the Falealili district's young men have developed skills at the centre that kick-started their applications to work in New Zealand as part of the Recognised Seasonal Employer (RSE) scheme.

The scheme has added to the newer, somewhat grander appearance of the district from what I remembered a decade ago.

Jobs are lacking in the area, Tuatagaloa said, and "this programme is availing the opportunity for young men to go away and earn some very serious money".

In six months, RSE workers can earn the equivalent of seven years basic wages in Samoa, he said.

"And that's massive," Tuatagaloa said, qualifying what it meant for Falealili in a year: "So, the 200-plus people that we send from our programme. Multiply that by seven. That's a lot of jobs."

Those jobs have led to the appearance of affluence in the area - newer cars, better homes and maintenance of properties, he said.

"And a bit of a spring in their walk because, you know, they've earned it." 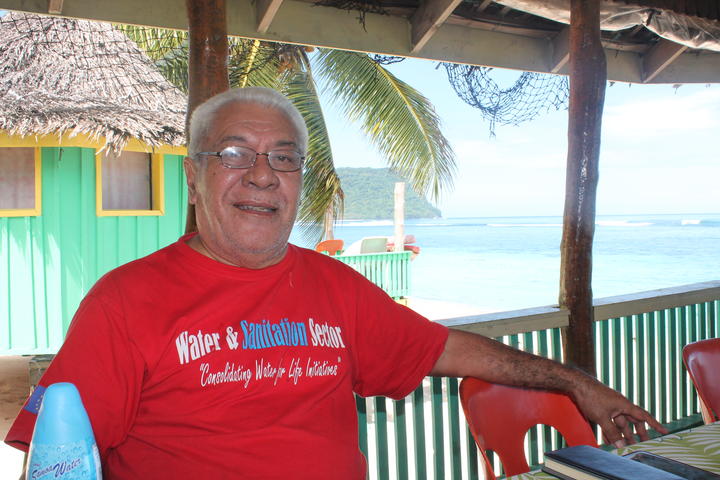 Further east I visited the Aleipata village of Lalomanu and owners of beach fale accommodation that had been badly hit by the tsunami.

I'd stayed at Taufua Beach Fales many times previously.

Taufua Sili Apelu and his wife Fa'afetai had taken on the business in the 1990s when age started taking its toll on Taufua Fuimaono Leifi Lesiolagi Taufua.

"He asked us, his daughter Fa'afetai and myself, to take over the running of the beach fales including looking after the family," said Sili Apelu, who explained that despite marrying into the family they had recently bestowed him with the Taufua family title.

When the tsunami smashed through their livelihoods, the family also lost 14 of its 28 members. 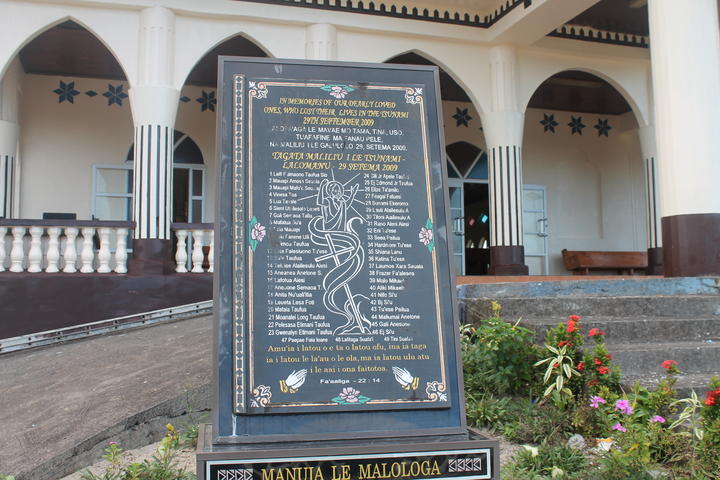 "Seven of them were kids from 11-months to 9-years old. The eldest was 9-years old, our grand-daughter," he said.

"And then of course we also lost our father Taufua. He was 97."

Despite such terrible misfortune, this grieving family showed its fortitude and resilience by resolving to rebuild the business in a way people could recognise. By the end of January 2010, they had the restaurant rebuilt and up and running.

I remarked to my host how I didn't realise it was a new building we were having lunch in.

"That's one of the reasons we didn't want to change the architecture, we have a lot of repeat guests and we didn't want them to be surprised in what we've done," Taufua responded.

It wasn't just their guests who remained loyal, according to Taufua.

When the family approached the bank with their plan, it was forthcoming with finance and offered an initial six-month holiday on loan repayments, he said.

"We wanted to rebuild as soon as we could, and of course money is the bottle neck," said Taufua, who also noted the generosity of many people.

"They heard about Taufua Beach Fales being devastated by the tsunami. All of those, irrespective of the size of the donation, helped us very much in those needy times."

By the end of May 2010, just six months after near total devastation, Taufua Beach Fales was rebuilt and busy.

"The tsunami in a way had also brought some advertising for us I suppose. Many people became curious so they came out to check where the tsunami was. So we had a lot of people in 2010."

It was a similar story for Litia Sini Beach Fales next door. 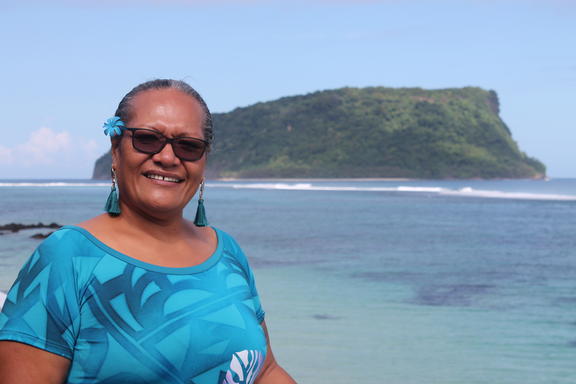 Owner and director Lydia Sini-To'omalatai didn't initially want to face the prospect of a rebuild. However, her late mother and business namesake Litia Sini, her brothers and loyal guests encouraged her to do so.

"This is a second home for them as a holiday place that they would love to come back to," she said.

However, there were many challenges, including a lack of insurance and no revenue stream, which some innovative thinking helped overcome.

New Zealand engineer Dave Smith and architect Chris Hume were among the loyal guests who pitched in to help. They collaborated on plans for the rebuild and ideas to help finance it.

Guests were presold holiday packages valid for five years giving Litia Sini the money it needed to ensure the bank would finance the rest of the rebuild.

On 25 September 2010, a year on from the tsunami, Litia Sini opened its new, improved doors.

"As it is now, I'm not saying it's better than what my mum and dad had done in the very beginning," Ms Sini-To'omalatai mused, "but it gives me more comfort being here when you get those big waves smashing on to the sea walls like a couple of days ago."

Both Lalomanu business owners agree the weather patterns have changed in the last decade.

In the last 18 months, there has been unprecedented beach erosion which could compromise their seaside buildings if it continues unabated.

"We have noticed since February 2018, huge changes of the wave patterns that have destroyed our sea wall outside of our beach fale operation," Ms Sini-To'omalatai said. 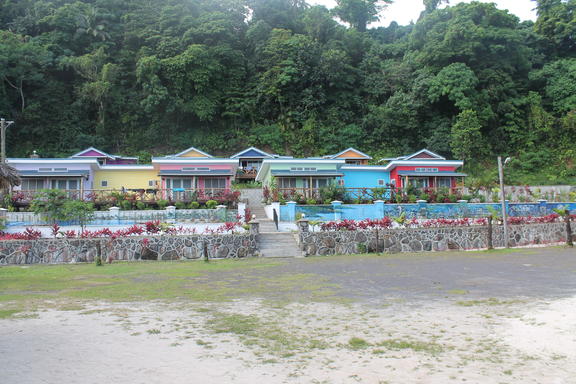 "Now we have this new challenge of climate change," said Taufua who, after pondering the sustainability of the business, decided to develop new accommodation further inland.

"That challenge had actually caused us to build the psychedelic buildings across the road by the foot of the mountain. That was us being aware of the negative impact of climate change on our side of the island."

For Lalomanu beach itself, the answer could be break-waters placed beyond the reef to temper the incoming waves, Ms Sini-To'omalatai suggested.

"And also to have groynes in between the fale operations, at least for where we are because we're right opposite the rips in Lalomanu reef."

Samoa Tourism's climate change officers are working on a strategy to install break-waters on the 11 kilometre stretch from Namu'a Island to the village of Lepa, she continued.

Twenty minutes flight away in American Samoa, I visited my family village of Leone which was badly affected by the disaster. Eleven of the 31 deaths in the US territory were in south-west facing, coastal village lands. 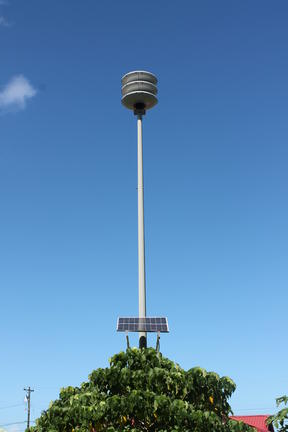 Stacey Salave'a survived the tsunami but was swept inland into the mangroves which diffused the wave's energy. Her long hair tangling in estuary plants is possibly what saved her unconscious body from drowning.

Returning from church early that morning, she arrived home during the massive quake and told me she turned on the television and radio to see if there was any more information.

"There was no warning."

However, when Stacey turned to look at the coast she said the ocean had retreated. "The tsunami!" her sister warned as she came running.

Stacey says she turned to run as well but doesn't remember having been swept hundreds of metres inland into the mangrove.

Since the tsunami, the changing climate has been a feature in Leone as well.

The local Fono representative, Andra Samoa, said the frequency of extreme weather events and their unpredictability had become more pronounced.

In both Samoas, preparations have been made for the next time a tsunami happens. Coastal warning sirens are in full operation that are linked with regional disaster response offices.

On Friday, a full exercise was held to test the protocols in place on Samoa's Aleipata coast.

To mark the 10th anniversary of the tsunami, flags will at half-mast throughout American Samoa starting at sunrise on Saturday, September 28th until sunset on Sunday, September 29th.

The territorial government will hold a public memorial service on Saturday, 28 September.

In Leone commemorations will centre around the Leone Healing Garden, the memorial dedicated to the tsunami victims which is tended by Andra Samoa and Stacey Salave'a.

In Lalomanu, the memorial for the victims is at the village church while in Poutasi, plaques will be unveiled at the Memorial Hall with the names of villagers who lost their lives in the tsunami. 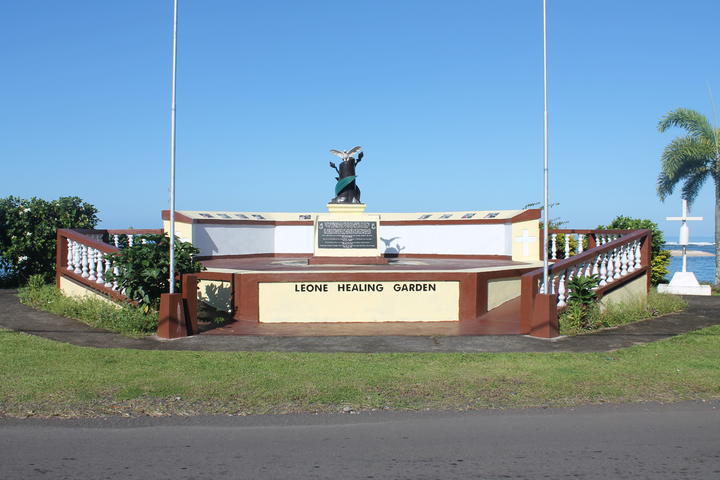