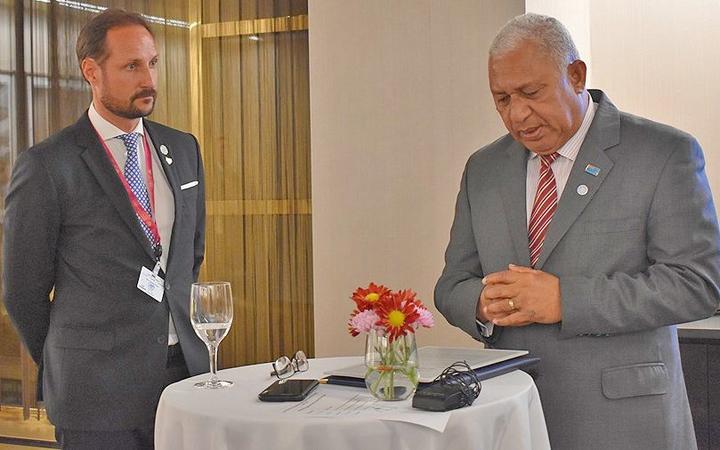 Frank Bainimarama announced Fiji's Climate Relocation and Displaced Peoples Trust Fund for Communities and Infrastructure in New York, where he is attending the UN General Assembly.

"We are seed funding the Trust Fund through a percentage of the revenue from our Environment and Climate Adaptation Levy," he said.

"Based on current projections, the annual allocation will be approximately $US5 million dollars a year. But this is not enough.

"We look forward to additional support to undertake this enormous task."

Fiji was being forced to deal with the burden of climate change even though it was not responsible for causing it, Mr Bainimarama said.

Entire communities were already being moved away from rising seas that had flooded their homes and ruined their farm land, he said.

"For a country like ours with limited means and a young population, dealing with this challenge - which has been caused through no fault of our own - has become an increasing burden.

"That burden seems certain to worsen as the impacts of climate change become more intense - not only the rising seas and the impacts on our agricultural practices but also the extreme weather events that pose an ever present and worsening danger to our people and our infrastructure."

"Of course, it isn't just the monetary cost of relocation that is a burden on nations like Fiji. Even more incalculable is the trauma of moving, of leaving your ancestor's burial grounds behind or seeing the land or foreshore area you have farmed or harvested for generations no longer being able to feed you and your family."

Fiji could no longer wait for communities to be drowned and needed financial help now to move people and to rebuild their lost infrastructure, the prime minister said.

"We need to arm ourselves with the ability to act now. We can't wait for communities to be drowned out by the encroaching tides. We need a holistic approach, we need adequate resources and we need it now."