Fiji dynamo Semi Radradra has been shifted to the wing for his team's opening Rugby World Cup match against Australia.

The Flying Fijians played a trump card in announcing their team for Saturday's match in Sapporo by shifting the explosive Radradra to the left wing.

It's the same position where the former rugby league star was a five-season NRL sensation for Parramatta, scoring 82 tries in 94 games until 2017. 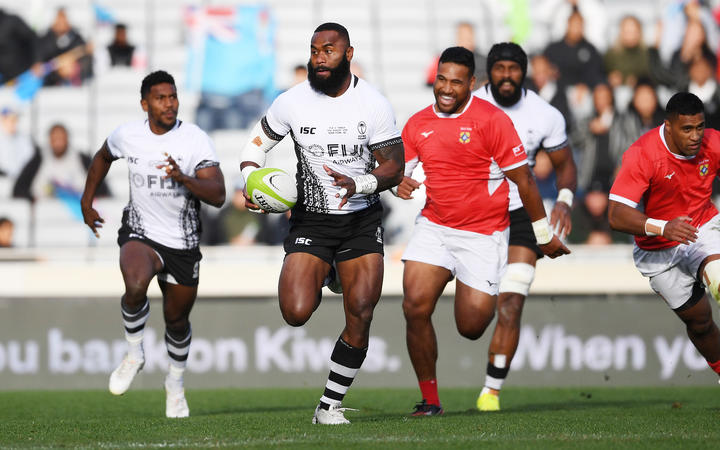 Semi Radradra with a typically strong run, this time against Tonga Photo: Photosport

All of the 27-year-old's Test rugby appearances have been at outside centre and he has been primarily used there at French club Bordeaux.

"We'll be sending him his (Radradra's) highlights from his Eels days and letting him know he's got his hands full," Toomua smiled.

"I think there's a few guys who will have their hands full out there, especially individually.

"We've got to hunt in packs, I guess, that'll be our best chance of limiting their opportunities," Toomua said.

Fiji coach John McKee has made the switch to accommodate another French-based star, Waisea Nayacalevu, in the No.13 jersey.

It means Fiji's record try-scorer Vereniki Goneva, who has scored 22 times, moves to the bench.

While Fiji was well beaten 37-14 when the teams last played in 2017, the world's ninth-ranked team have since made strides, notching test wins over Italy, Scotland and a first-ever defeat of France in Paris last November.

A fearsome-looking backline is served by a pack laced with players hardened from experience in the European club top flight.

All five players who are at their third tournament are in the 23, including No.8 Viliame Mata and lock Leone Nakarawa, both rated among Europe's top forwards.

The pair also won sevens gold at the Rio Olympics, alongside Josua Tuisova, who is on the right wing.

Sydney-born Ben Volavola will be familiar to the Wallabies, having played Super Rugby for the Waratahs and Melbourne Rebels in the past.

Prop Campese Ma'afu is the younger brother of former Australian prop Salesi Ma'afu and is named after former Wallabies great David Campese following his starring role on the 1984 Grand Slam tour of Europe.

Australian coach Michael Cheika wants no surprises which is why he is fielding what is being dubbed the "Pooper" flanker combination against Fiji.

The Wallabies will start their renowned openside mix of captain Michael Hooper and David Pocock for the 25th time on Saturday, the only change to the XV who stunned the All Blacks in Perth last month. 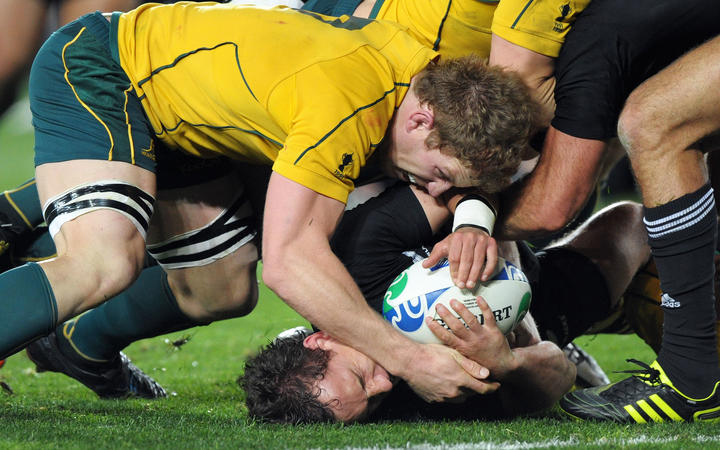 Lukhan Salakai-Loto is demoted to the bench.

Cheika insisted it was a tight call but said 31-year-old Pocock, attending his third World Cup, brings the mature qualities that might be needed if things start turning pear-shaped against a Fiji team stacked with attacking weapons.

"For the first game of the World Cup, I went for a little bit more experience, to be honest," he said.

"They've done this before, the two boys playing together. We've worked on the possibility of this kind of combination for the last couple of weeks and they've been working well together."

Cheika said the selection was no reflection on Salakaia-Loto, the only player to have appeared in all 400 minutes of Australian Test action this year.

The Queensland Reds enforcer stood out in the 47-26 upset of the All Blacks in Perth and his absence could place pressure on a Wallabies lineout that has been functioning well.

Cheika said while there were obvious differences between the two, the nod to Pocock wasn't simply because of his breakdown prowess.

"Rest assured, these players (Pocock and Hooper) aren't selected just for their play on the ground.

"There's a lot of other facets to the game where they can contribute to the team, both in attack and defence. And from an experience point of view as well."

The other most contentious selection was the halves, where Nic White and Christian Lealiifano were again favoured over the 2015 World Cup pairing of Will Genia and Bernard Foley.

Ten of the starting team are at their first World Cup.

It is the third for Pocock and fullback Kurtley Beale; and the second for outside centre James O'Connor, Hooper and prop Scott Sio.