Questions are being asked in the aftermath of the tragedy at Indagen, where 13 pilgrims froze to death on the way to a church celebration in Papua New Guinea.

About 500 people attended August's 100th anniversary of the first Lutheran mission in remote Kabwum district, to where most walked over trails high in the Sarawaged mountains.

The deaths are being attributed to a lack of preparedness and a slow response from disaster authorities. 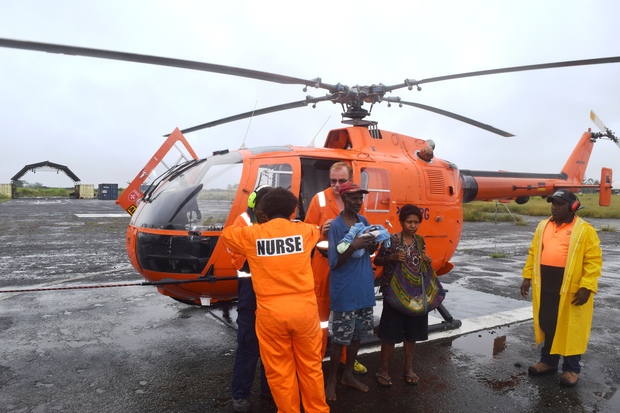 Along with 28 survivors, the 13 bodies were retrieved by Manalos Aviation, a private helicopter company, whose owner, Jürgen Ruh, said the pilgrims were not prepared to traverse the mountain passes or for the bad weather that closed in.

"If you're not used to climb to 10,000 feet, you're not dressed appropriately, you're in the cold, you've got strong winds and rain at the same time, it gets to your bones pretty quick. And if you stop walking - your end is near," Mr Ruh said.

"Whilst locals are perhaps better prepared when they walk from Lae to Indagen other people just simply were not and all the people who died there were from hypothermia and from hunger."

Mr Ruh spearheaded the rescue effort from 16 August after flying the Governor General to the celebration. He inserted villagers into the mountains to search for survivors and ferried in food while extracting bodies and those lucky to be alive.

Local disaster authorities did not respond quick enough to the tragedy, he said.

"I got involved more a less by default because there was very little happening.

"On day one when we realised that we have an extended problem I made the request for the defence force to get involved. That request was in place at the provincial disaster office. I think it took seven or eight days before the defence force was notified that 'hey, we need your help'.

"Everyone in government would have expected the Provincial Disaster Office to take action which simply didn't happen."

8 people have been airlifted to #Indagen. “They are at 10,000 feet. It’s cold and the weather is bad. They are not prepared for the altitude and the freezing weather,” @JurgenRuh #ManolosAviation. More food airlifted to those left on site.#kabwum #morobe https://t.co/fxo8Rtfz60 pic.twitter.com/b6XzYU4yyd

But the director of the Morobe Provincial Disaster Office, Charlie Masange, said at first his office only received "sketchy" information that it could not verify.

"When we get a report we have to verify it from the source. The report that came through was a bit sketchy and we didn't have enough information to make a decision," Mr Masange said.

"The helicopter made its trip down there and they got reports but they have not informed us of those things happening. The start of it was a communication problem between the people that had the information and the relevant authorities."

A week later the defence force was called in to verify the reports and to help with the search but Mr Masange said the soldiers were withdrawn after three days having found no survivors.

He said his office supplied food, blankets, tents and torches for Mr Ruh to fly to the searchers.

Mr Masange agreed that people were not properly prepared for their pilgrimage as did a statement from the Bishop's office of the Evangelical Lutheran Church in Lae.

"Those traveling over the Sarawaged Ranges did so at their own planning. They were not fully prepared. Local knowledge says it normally takes three days and nights to walk across and that you have to be fully prepared physically, mentally and spiritually for the walk.

"A guide is often needed. Those that travelled did not inform organisers and did not have a guide."

Eight people rescued from #Sarawaged Ranges. National Newspaper journalist, @ErebiriZurenuoc who travelled to the site this afternoon reports that they left biscuits, tinned fish, blankets, two two-men tents, mugs and a kettle with those who are still there. pic.twitter.com/WYEWVe4IvU

The church extended its deepest condolences to the families but said the celebration was organised by the Ukata District parish and not the national office.

All church districts were being advised to take extra precautions and prepare well for future events, it said.

Mr Ruh said he was now trying to bring closure to those who had lost family members.

"At this stage I'm just focussed on ensuring that the families who lost loved ones, that they have closure. That they know where their loved ones are buried and are able to spend time visiting the graves," he said.

Mr Ruh said the prime minister had promised to reimburse him for the rescue effort.