Papua New Guinea are one win away from a place at the Women's T20 Cricket World Cup after advancing to the semi-finals of the final qualifying tournament.

Sibona Jimmy was awarded player of the match after starring with bat and ball as the Lewas beat the USA by 22 runs in their final group match to set up a winner-takes-all showdown against Thailand on Thursday. 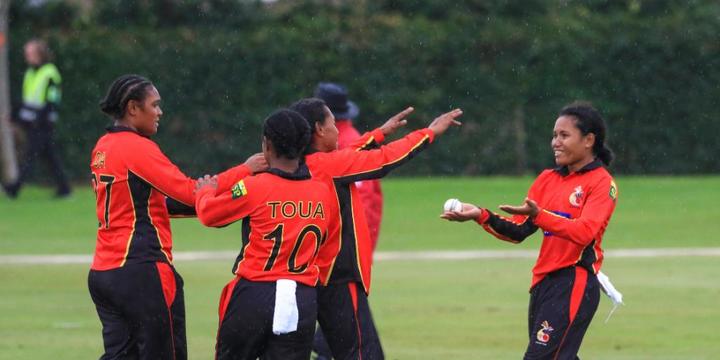 The 26-year-old opening batter notched her first ever T20 international half century, blasting 58 not out from 50 balls as PNG posted a competitive 133 for 3 from their 20 overs, in their final pool match in Arbroath, Scotland.

The American run chase began strongly as they raced out to 26 without loss after three overs. But Jimmy made an immediate impact with the ball, conceding just one run from her opening over before a double-strike in her second as she dismissed Nadia Gruny and captain Sindhu Sriharsha LBW in the space of three deliveries, to reduce the USA to 32 for 2 midway through the sixth over.

The Americans were set a revised target of 117 from 17 overs, after rain forced a brief delay to the match, but Sibona Jimmy was not done yet. The right-arm off-break nabbed the wicket of Shebani Bhaskar to finish with impressive figures of 3 for 15 as the USA came up short on 94 for 7 from their allotted overs.

"She played a really good game and as a senior player that's very encouraging to see going into the semi finals. Tanya Ruma also scored 29 and that sort of set the platform for our victory today," said PNG head coach Rarua Dikana.

"We needed to score big to ensure that our net run rate or our Duckworth (Lewis) system is not at its minimum so when we were batting the girls were advised if we were in a good position to go hard and score well over 130 and she was the one who set the platform pretty well for a good total with the assistance of Tanya."

With victory against the USA secured, the PNG team then huddled around a phone to watch the end of the game between Bangladesh and Scotland which would determine their hopes of reaching the knockout rounds.

This is how the PNG team found out they qualified for the semi-finals of the #T20WorldCup Qualifier.

Just before having to run off to catch the team bus! pic.twitter.com/FmRERHbGeW

Bangladesh prevailed by 13 runs under the Duckworth Lewis method to seal top spot in Group A and ensure PNG finished in second spot. The Lewas will now face Group B winners Thailand, who are unbeaten in three games, while Bangladesh will take on Ireland in the other semi-final clash.

Rarua Dikana said the PNG team learnt a lot from their run to the semi-finals last year and are determined to go one better and create history.

"In all the games we've played we've been very competitive," he said.

"We were very unlucky to lose to Bangladesh in a rain-affected match as well but the girls have been playing really good cricket. They're playing according to our plans: the batters have been executing well, the bowlers and the fielders have been going really well.

"We will take the same positive approach, into the semi final match and it's going to be an exciting day for the girls. We came close last year, we were in the same position last year.

"We just had our team meeting and we just want to go one better this time around and the girls are looking forward to the semi-final day on Thursday."

The two semi final winners will qualify for the 2020 ICC Women's T20 World Cup in Australia, which begins in February.

That result at Forthill means that Papua New Guinea are now just one win away from the T20 World Cup!#T20WorldCup pic.twitter.com/mUCTyk87ED