Indonesian civilian militia groups are stoking tensions in West Papuan towns and cities after widespread protests across the region in the past two weeks. 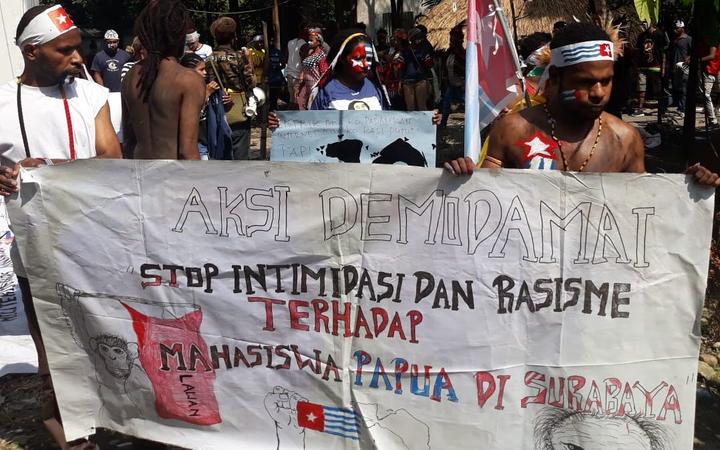 The protests were sparked by racist harassment of West Papuan students in Javanese cities but have developed into the largest Papuan independence demonstrations for decades.

However, the protests have given way to unrest and deadly violence, while fears mount over a crackdown by Indonesian security forces in the region.

Indonesian police have arrested dozens of people in the capital of Papua province, following the protests and unrest last week.

The second major wave of protest in Jayapura in the past fortnight lapsed into rioting involving the burning of the Papuan People's Assembly complex and other buildings. 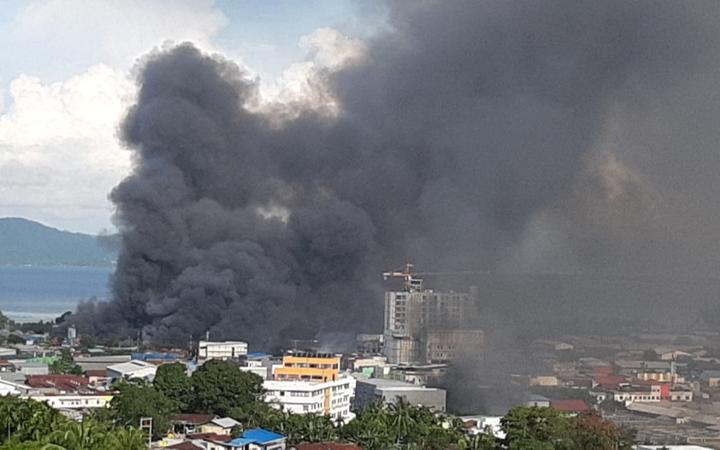 Protestors also occupied the provincial government buildings, hoisting the banned Papuan Morning Star flag at the top of the flagpole at the governor's office.

But he also said it was important that those behind the racist harassment of Papuans at a student dormitory in Surabaya last month - whether community members or security officers - are held to account.

The flow of information about the protests has been disrupted since Indonesia's government blocked internet access to Papua almost two weeks ago, claiming it was a necessary measure to stop 'hoax' news spreading.

Yet in recent days reports have filtered out about groups of non-Papuan residents in Jayapura clashing with protestors or attacking them.

A young Papuan man was killed from a gunshot after a group of vigilantes from another part of Indonesia attacked Papuan students in a dorm in the early hours of Sunday in Abepura. Around a dozen other students were injured, with at least one still in a critical condition.

Police said the security situation in Jayapura was now under control, although comments by Indonesia's police chief about involvement of foreign provocateurs in the unrest instill little confidence in such claims.

Abepura-based university lecturer Paul Paramma said that since the protests surged, tension had boiled over between migrants from other parts of Indonesia - such as Java and Sulawesi - and Papuans, particularly Highlanders.

"People from outside of Papua they fly the Indonesian flag, they fly it everywhere, even in the middle of the road, to say to the demonstrators that 'we are strong, we exist and don't try to mess up with this town'.

"So there's a big tension here in Jayapura between people from outside and indigenous people," said Mr Paramma who explained that he asked for management of the University of Science and Technology to advocate for students who have been arrested.

The crowd yelling racist chants at Papuans in last month's mob siege on the student dorm in Surabaya was noted to have included members of nationalist civillian militia groups,effectively supported by Indonesian security forces who forcibly entered to arrest the students who they accused of disrespecting the Indonesian flag.

Similar elements from the 'red-and-white' brigade, brandishing national flags and weapons, clashed with protesters who mobilised in several Papuan towns in recent days, including Fakfak where they appear to be directed by Indonesian security forces.

Deakin University international politics specialist Professor Damien Kingsbury said such militia groups were imported to Papua by the military some years back. At times like this, he explained, they play a co-ordinated role.

"Papuans are being attacked by these pro-Jakarta militia groups, as well as by police. They appear to be working very closely together," he explained.

"When you look at the structure of militias in Indonesia, they are nominally independent, but they each have a direct structural linkage back to a military or police organisation."

Indonesia has deployed an extra 6,000 military and police personnel to Papua since the protests began two weeks ago. In parts they have responded with teargas and even gun fire.

Papuan rights activists say at least seven protestors and a military officer were killed during last week's protest in remote Deiyai in a fracas prompted by police officers' use of teargas , although authorities said the death toll was three.

Meanwhile, Mr Enembe made a direct appeal to security forces to keep the peace.

"The security forces - in this case the military and police - when handling the expression of opinions by the people of Papua, both in Papua and other regions in Indonesia - should as much as possible make it a priority to handle these expressions in a way that avoids violence or arresting Papuans just for delivering the message."

Authorities have forbidden further protests in Jayapura, but it is unlikely to stop people taking to the streets again as West Papuans sense the moment to keep pushing has arrived.

President Joko Widodo's chief of staff said he would visit Papua this Thursday to discuss the unrest with local leaders.

Professor Kingsbury described it as unlikely that Jokowi would meet any demands of the independence movement. But he said that given this is his final term in office, Indonesia's president did have a chance to implement some reform.

"The real difficulty is going to be that any decision he takes in relation to West Papua would have to be passed by the lesgislature and that is heavily stacked with nationalists who would be pretty unlikely to endorse anything seen to be too sympathetic towards the West Papuan independence movement."

Jokowi would also face resistance from Indonesian military commanders to any concessions to the movement, especially anything relating to a future referendum.