People in Kiribati are making urgent preparations for what is predicted to be a record king tide tomorrow morning. 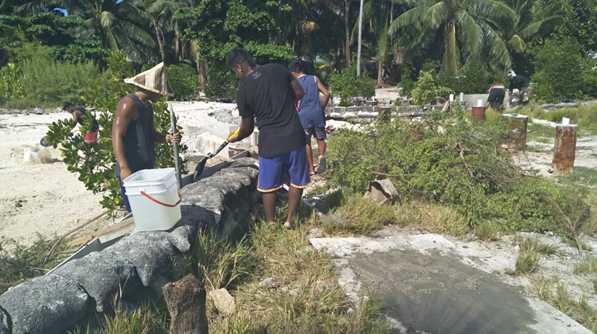 The Kiribati Climate Action Network's National Coordinator, Pelenise Alofa, says vulnerable communities on Tarawa have been building up seawalls in readiness for the inundation.

Tomorrow morning's king tide is predicted to be worse and will peak at 5am local time on Tarawa, home to half the country's 116-thousand people.

Families living on the coast have been warned to take precautionary measures for tomorrow's inundation which is likely to temporarily displace people.

Many of these communities would require assistance, with the Network currently coordinating various actions on the ground, according to Ms Alofa.

"Supporting vulnerable grassroots communities build and strengthen their seawalls is a priority now as well provision of rain water tanks for the hundreds of communities whose water wells are already inundated," Ms Alofa said.

"The longer term ambition is to build climate proof houses for affected communities that are elevated safe from the rampages of the waves so that young people, women and everyone are not affected psychologically from such experiences."