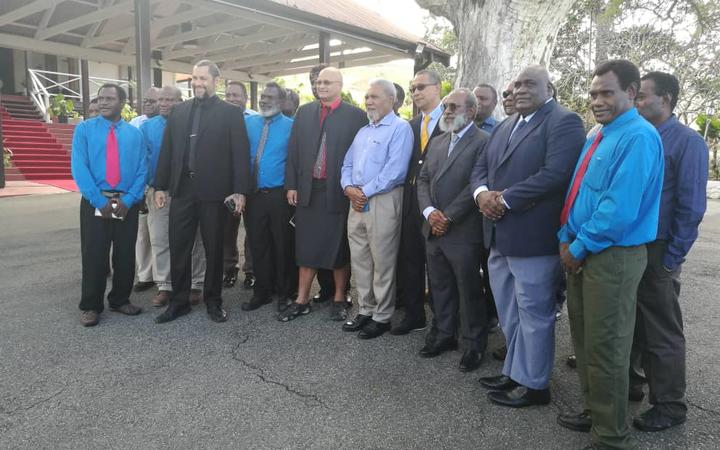 Ian Ling-Stuckey has been sworn in as Treasurer Photo: RNZ Pacific / Melvin Levongo

Mr Maru was the most senior minister from the PNC, but Mr Marape said the party should leave his coalition government, citing a 'bad influence'.

He accused Mr O'Neill as well as key opposition MPs Patrick Pruaitch and Belden Namah as having tried to undermine his government.

In the most prominent promotion, former Opposition and Kavieng MP Ian Ling-Stuckey has been sworn in as Treasurer.

Mr Ling-Stuckey replaces Sam Basil who had just taken part in meetings as part of the Australia-PNG Ministerial Forum this week.

The change in Treasurer comes after Australia declined a request from PNG for financial assistance for direct budget support at the meeting.

Earlier this month Mr Ling-Stuckey hit out at a fiscal outlook report issued by Treasury, saying the numbers did not add up.

Meanwhile, Mr O'Neill has described his successor's cabinet reshuffle as an insult to MPs who helped elect Mr Marape in May.

In a statement, the PNC leader said that appointing the opposition's finance spokesman as Treasurer was a gross insult to many MPs in government.

"Surely, there must be one member in Government with the credentials to fill the Treasurer's post," Mr O'Neill said.

"Even his own Pangu Pati ranks must be smarting from this new insult."

He also said that in sacking Mr Maru, Mr Marape had removed one of the hardest working and honest ministers in government.

According to Mr O'Neill, under his former close political ally, government direction is stalling.

The PNC leader said it was dangerous for PNG that all the hard work his team put in over the past eight years was being derailed by his successor.