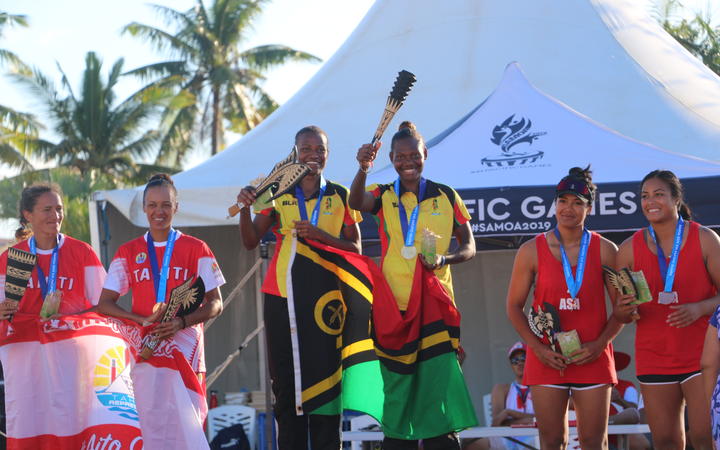 Vanuatu defeated Tahiti in straight sets to win the women's beach volleyball final at the Pacific Games, ensuring Miller Pata will end her Pacific Games career on a golden note.

Pata and Sherysyn Toko prevailed 21-12, 21-18 on the Apia waterfront yesterday to win Team Vanuatu's second gold medal of the week.

The 31 year old Pata missed the 2015 Games when Vanuatu claimed the silver medal and said it was great to back up the gold medal she won in New Caledonia eight years ago. 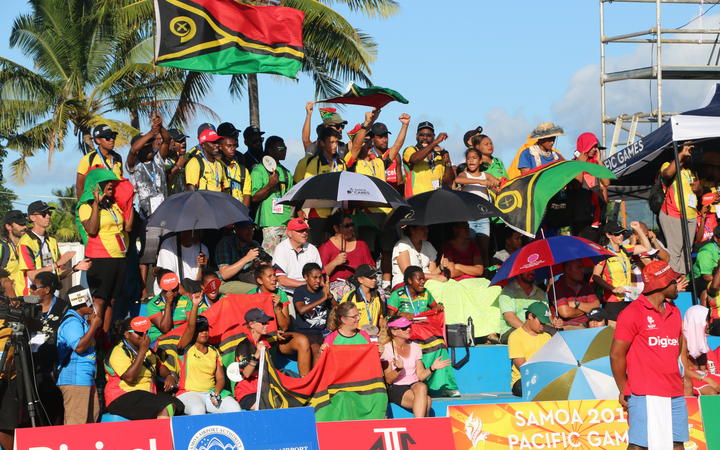 Miller Pata made her Pacific Games debut in Apia 12 years ago and revealed after the final that her second Samoan Games would also be her last.

"That's my last Pacific Games...we are trying to qualify for Tokyo next year so I still play for World Tour and try to qualify and then after that I can retire."

But the "Super-Mum", who made global headlines when her son Tommy joined her on the podium at last year's Commonwealth Games, believes the future of Vanuatu Beach Volleyball is in good hands.

"We got a bronze medal in 2007 so it's different now, we have more experience and we win some medals in the Asian Tour and World Tour so we've got more experience to come here to participate in the Pacific Games and so yeah we are really happy." 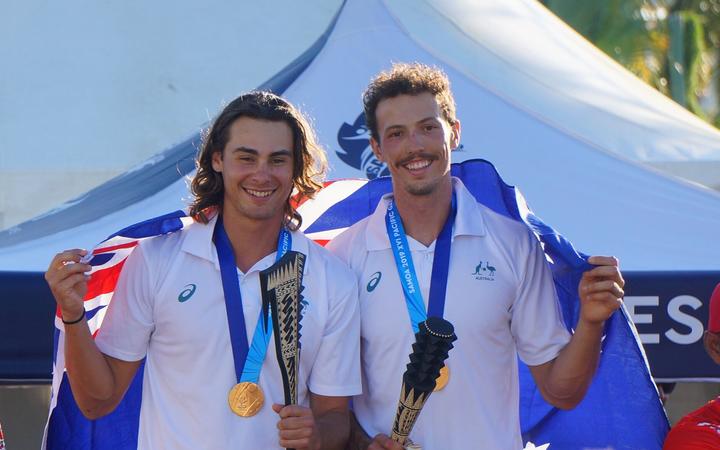 Marcus Ferguson and Tim Dickson are all smiles after winning gold at the Pacific Games. Photo: Vinnie Wylie/RNZ Pacific

Green and golden debut for Aussie men in Apia

The Australian men's beach volleyball team overcame an injury scare to make a winning debut at the Pacific Games, beating Tahiti in three sets to claim gold on the Apia waterfront.

Marcus Ferguson and Tim Dickson comfortably won the opening set 21-9 but Dickson injured his quad muscle in the latter stages, with Tahiti taking advantage to win the second 21-19 and send the match to a deciding set.

A medical time-out allowed Dickson and the Aussies to compose themselves as they prevailed 15-9 to clinch gold in their first appearance at the Pacific Games.

"This is the first time Australia's been invited to the Pacific Games and we haven't really played against any of these teams before. We came here not knowing what to expect and we were pushed to our limits by these teams - they're so athletic and they can really play. It's been a great week of challenges and setbacks and overcoming those things and the great emotion right now would be pride, I think," he said.

The Australian duo, who used to flat together, are more accustomed to travelling on their own and Dickson says they've really enjoyed being a part of Team Australia and the wider Pacific Games family.

"It's been so much fun having the big team here and the big team vibe/atmosphere and we've had an absolute ball this week. We've had some of the weightlifters and some of the sailors coming to cheer us on and that big team vibe that you don't really get in beach volleyball, when you're travelling around by yourselves, is really special and we've cherished that this week," he said. 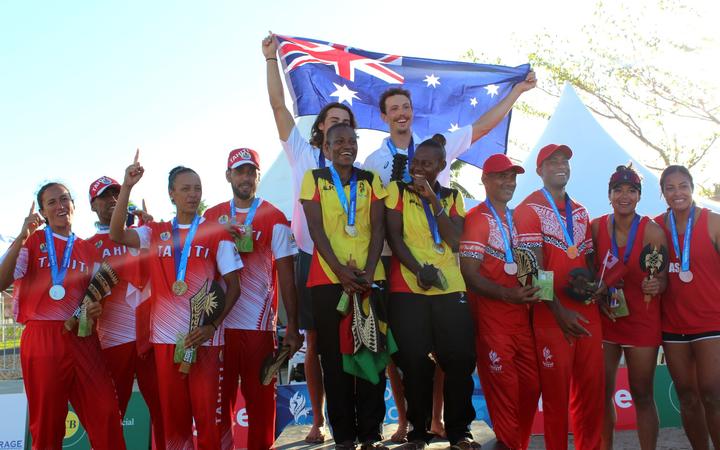 It's all smiles at the medals ceremony. Photo: Pacific Games Service