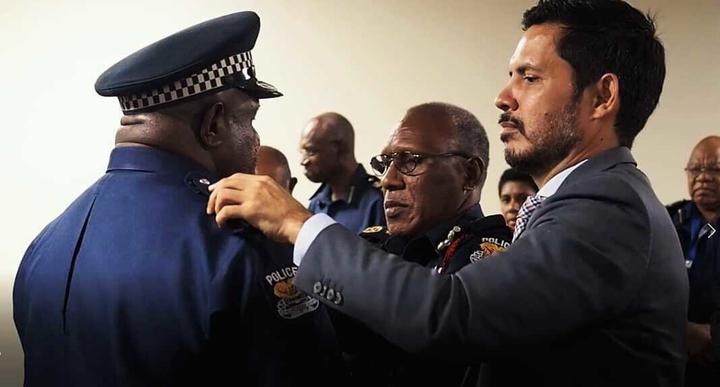 Mr Baki said he will apply to court for a restraining order against the National Executive Council decision to replace him, and his two deputies, Raphael Huafolo and Jim Andrews.

According to Mr Baki, due processes were not followed by Mr Kramer, focussing on fact that the new appointments are only in acting capacity.

He said his legal action is not intended to discredit the three officers who have been appointed as acting commissioner and deputies.

"They are experienced and qualified officers who are more than qualified to occupy these offices, " Mr Baki explained at a press conference.

"This action has been taken to protect them as well as any other senior officers in the constabulary later on.

Why is the government not following due process in the appointment, appointing them as substantive Commissioner or Deputy Commissioners instead of in acting capacities?"

Gary Baki said he is ready to retire but wants to see the police force free from political interference.

Mr Baki said other objectives of his legal action were ensuring continuity and stability within the Police Force, with a smooth transition to new leadership.

Mr Baki explained that the appointment of Mr Tokura would have to be properly approved by the Autonomous Bougainville Government.

"For him to come and assume this responsibility, he will need to have his appointment revoked," he explained.

"That means that I will have to get the instrument of appointment back and consult with the ABG and allow them to approve the process."

In his letter to Mr Baki last week, Mr Kramer stated that because the commissioner had passed compulsory retirement age of 60 he had to cease working in the role.

Mr Baki said he would seek interpretation of the courts on this, arguing that the compulsory retirement didn't apply in the case of his employment contract.

"Let me stress here that this is not an attempt by me or the two deputies to remain in office," Mr Baki said.

"All career police officers must be treated with respect and due consideration and not tossed around to satisfy individual desires."

Mr Baki said despite the new government of James Marape signalling intent to crackdown on corruption, the appointment of a new police leadership was "not beneficial for good governance, transparency or accountability".

"It is rather a move intended to protect and preserve those in power," he said.

"We have investigation files on some 40 Members of Parliament, both in Government and in the Opposition. This includes a good number of ministers in cabinet.

"Will the Government give us the support and cooperation to prosecute these cases?"

Mr Baki was appointed for his second stint as police commissioner in 2015 by the government of Peter O'Neill.

At the time, the police fraud squad was seeking to arrest Mr O'Neill in relation to a major alleged corruption case.

The arrest warrant was never executed, and after a long series of legal challenges around it lauched by Mr O'Neill, the case was closed last year by Mr Baki.