The Governor of American Samoa Lolo Moliga is scheduled to arrive in Honolulu today where he'll spend two weeks before returning to the territory after an extended absence. 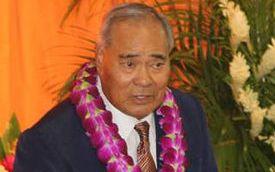 The governor left the territory in early February on a trip that was to take him to Washington DC for a series of meetings in the capital.

However, after health check ups in Hawai'i he travelled to Seattle, Washington and was admitted to Swedish Hospital.

In March, he had a heart stent implanted and remained in hospital for a couple of weeks.

Since he was discharged he has remained close to the hospital receiving treatment on an outpatient basis.

The governor's chief of staff, Fiu Johnny Saelua, told KHJ News that Lolo would remain in Honolulu for two weeks to acclimatize and have follow up appointments before he returns home.

Lolo is reported to have maintained daily contact with the acting Governor Lemanu Peleti Mauga and his staff during his absence.