A leading international climate analyst says the global climate crisis will continue with devastating effect unless fossil fuels are completely phased out.

Samoan-born, New Zealand-based scientist Penehuro Lefale was one of the contributing authors for the Intergovernmental Panel on Climate Change, which was jointly-awarded the 2007 Nobel Peace Prize.

Mr Lefale said the world's reliance on oil, gas and coal and its inability to find alternatives for "clean fuel" were key contributors to the problem.

He said in order to win the "carbon war" the world must realise that carbon was the problem.

"Unfortunately, the world relies on fossil fuel which is the main sources of carbon. It is the fuel of the global economy.

"So, we need to find some alternative solutions to fossil fuel. We will not solve this problem by just doing what we're doing now."

He said the world was faced with a major challenge because the global economy relied heavily on oil and gas.

"You use your car, you go on a plane, the ships, your electricity at home. Every single human activity relates to fossil fuel carbon emissions."

He said the other biggest challenge was to rid carbon from economic activity "before it's too late when the atmosphere no longer can accept more carbon".

Mr Lefale said there had been numerous pacts signed and agreed to by world leaders - with the United Nations Forum Convention on Climate Change in 1992.

He said the international community also agreed to be proactive about the issue of climate change and pushed for the Kyoto Protocol - agreed to in 1997. 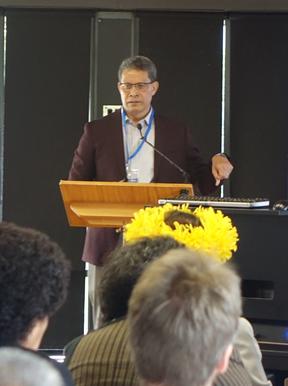 "And it's come true now. China is now the number one greenhouse gas emitter compared to the US back in 1997."

But Mr Lefale said whatever the context of political debate, "the atmosphere doesn't recognise political boundaries".

"And that's a difficult negotiation because the developed countries cannot do it on their own - developing countries have to act.

"But then developing countries need the technology and need assistance from developed countries not only to reduce gas emissions, but also adapt to current impacts."

Mr Lefale said there were two things the world could do to solve the problem.

"First is to remove fossil fuel subsidies because the bulk of the global economy is on fossil fuel," he said.

"A lot of the big companies like oil companies, natural gas and coal companies are heavily subsidised by governments to make it cheaper for us - like when you go to fill your car in the gas station.

"So, unless we remove that subsidy, there will be no change.

Mr Lefale called on the world's leaders to follow up on their talks of commitment with real and effective action.

A long history of climate research

Mr Lefale said he had been involved with climate science since 1983, when he was still a student.

"I started off as a weather observer back in Apia under the former New Zealand Meteorological Service. And when we were looking at the trends back then, it was just a science issue, we were focusing on the science side, and it wasn't politicised.

"Once you moved into the realm of the political process like in 1998 - the second world climate conference - when Margaret Thatcher, the former prime minister of the United Kingdom, called it the most difficult challenge the world's going to face.

"Coming from that sort of highest level makes all the difference in terms of how the political debate moves on the climate change."

Mr Lefale said climate change became political when James Hansen, the former professor at NASA, testified in Congress in 1988, following one of the worst-ever droughts in US history.

"This is where the human-induced component came up. So politically there was this movement towards the need to do something about it.

"When I compare how much carbon and other gases are in the atmosphere and I compare it to today - it's doubled."