Three female sports journalists from Fiji and Vanuatu will commentate at the FIFA Women's World Cup this month, as part of a ground-breaking pilot project for women's sport. 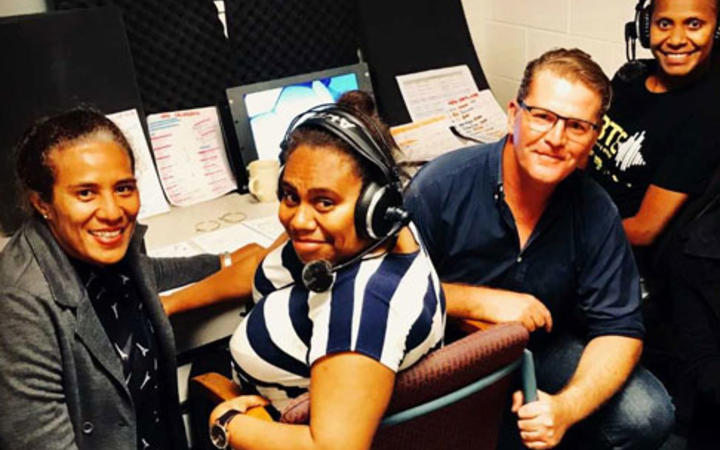 Adele Willie and Jennesa Hinge Moli from Vanuatu and Lavenia Yalovi from Fiji will commentate for FIFA at the Women’s World Cup. Photo: ABCID

Lavenia Yalovi from Fiji and Adele Willie and Jennesa Hinge Moli from Vanuatu will commentate New Zealand's three World Cup pool matches in their own languages, Fijian and Bislama, beginning with Tuesday's clash against the Netherlands in Le Havre (Live at 12am Wednesday in Vanuatu, 1am in Fiji and New Zealand).

The opportunity in France comes after the three women were part of a team that produced a live broadcast of the OFC Women's Nations Cup semi-finals in November.

The trio were trained through the Women in News and Sport program funded by Australia's Department of Foreign Affairs and Trade.

The WINS program is run by the ABC's International Development unit and aims to increase the opportunities for women in sports journalism and increase coverage of women in sport.

Adele Willie said it is perfect timing to be broadcasting football in local languages, in the United Nations Year of the Indigenous Languages.

"Jenessa and I will be commentating in Bislama and Lavenia in Fijian, in the year promoting indigenous language," she said.

Australian media consultant Aaron Kearney designed and delivered the commentary training for ABCID and said the team will do the Australia and the Pacific region proud.

"The Department of Foreign Affairs and Trade and ABC International Development deserve a lot of credit for having the vision to support this concept and see the wonderful possibilities," he said.

"To now have an Australian-developed idea taken on by an organisation like FIFA and showcased at the World Cup is great recognition for all involved."

The group will be bringing Pacific language radio commentary to ten countries across the Pacific and the Oceania Football Confederation website.

The commentary will also be broadcast on RNZ Pacific.