The brainchild of Western Force owner Andrew Forrest, Rapid Rugby includes a number of modified rules to speed up the game, including 35 minutes halves, no gain in ground when kicking directly to touch and nine point "power tries" for attacks launched from within a team's own 22. 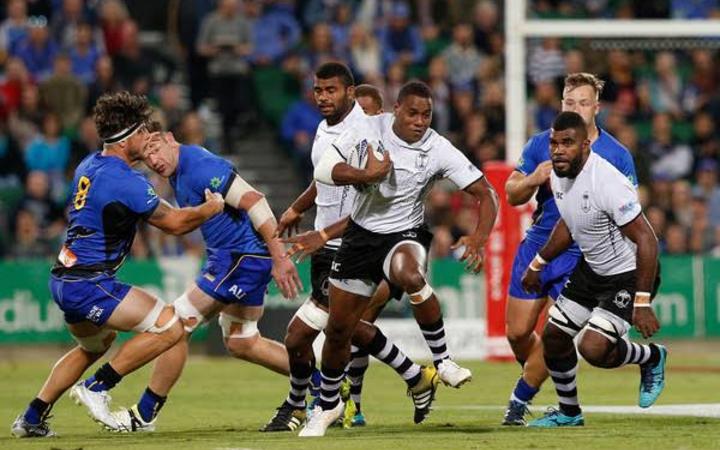 The Kagifa Samoa squad features a mix of players from Samoa, New Zealand and Tonga, while the Fijian Latui team is all locally based and features the bulk of the Drua team that won last year's Australian National Rugby Championship.

"That's how the Drua played last year, running rugby from the 22 to the tryline and that's one of the new rules in Rapid Rugby: if you run the ball in multiple phases from the 22 you get nine points straight away...so that's a new challenge for the team and the players they needed to be really fit mentally and physically. There's a lot of running and a lot of skill level that has to be seen from the players," Senirusi Seruvakula said.

Global Rapid Rugby's Head of Rugby, former Wallabies flanker Matt Hodgson, said the rule changes were already having an impact and had the full support of World Rugby.

"The biggest rule I'm seeing most reward from is the no kicking out on the full. I think it's an element of the game that was too much of a safety barrier for teams coming outside their own 22, so already at the moment in the Asia (Showcase Series) we're averaging ten less lineouts per game which is exciting because the ball is in play a lot longer," said Matt Hodgson.

The Fijian Latui, Kagifa Samoa and Western Force teams will play each other home and away over the next six weeks.

Pacific Rugby Players CEO Aayden Clarke said the games are a good opportunity for local players in Fiji and Samoa particularly to test themselves at a higher level.

"That's the pool they're being selected from: Fiji they're within the club competition that's happening at the moment and the high performance players there. For the Samoan team it's basically players who aren't involved in Super Rugby and who are currently playing club rugby and trying to prepare for the Mitre 10 Cup," said Aayden Clarke.

Aayden Clarke said there are also a large number of Pacific Island players involved in the other Rapid Rugby teams, including three Manu Samoa internationals in the Western Force.

Travel and accommodation costs for all teams are paid for by Global Rapid Rugby, with the franchises covering the general running costs and player wages.