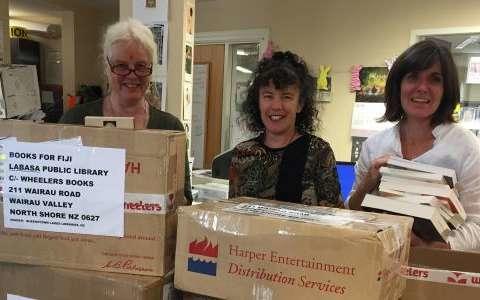 Queenstown libararians with some of the goods that were donated to Fiji. Photo: Supplied / Queenstown Lakes District Council

Nine large cartons of library books have been sent to the Fiji town of Labasa.

The books were donated by public libraries in Queenstown, New Zealand through a project called the Pacific Libraries Project.

They will restock shelves at the public library in Labasa, as well as a mobile library that visits schools in Suva.

"The ... project is quite clear about the type of books that the islands' communities need the most," said librarian Sue Gwilliam, who added that the emphasis was on sending books that were in good condition, less than five years old, and relevant.

"Books also need to be suitable for Fiji's relatively more conservative society," she said in a statement.

"Mills and Boon romances are popular for example but anything racier than that wouldn't be suitable at all."

She said children's titles were in demand along with non-fiction books on topics like crafts, cooking, nursing and biographies.