Time has run out for Tuvalu. 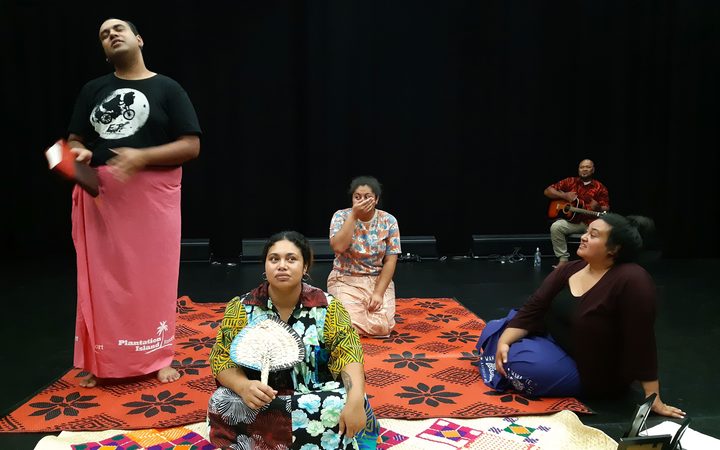 The cast of Au Ko Tuvalu in rehearsal Photo: RNZ/Sally Round

It's the last day and Aunty Fala FM is broadcasting final messages to the island before everyone must evacuate.

A boat is arriving soon to move the population of these remote scattered atolls to New Zealand.

"And now for the community notices! The fresh supply of drinkable water has been contaminated," Aunty Fala intones wearily.

Meanwhile 15-year-old Lefa and her siblings squabble as they rush to prepare for the unknown.

"Sup ... cuz. Sup, cuz," she practices over and over, tasting the new words she needs to know to fit in in New Zealand.

Au Ko Tuvalu, a stage play at this week's Wellington Fringe Festival, is a statement about identity as much about climate change, according to its writer and director Tavita Nielson-Mamea.

"Climate change is definitely a big factor in the play but I'm not talking constantly about it.

"It's mainly about the people and how they're dealing with it," he said.

For Nupaia Talake, who co-ordinated the music for the show, it's a case of fiction reflecting reality. He left Tuvalu after Japanese scientists visited in the mid 80s and the word spread that Tuvalu was at risk.

He said he got goosebumps when he saw the script.

"I was the only one crying because it reminded me of that day," he said.

Au Ko Tuvalu is playing at Wellington's Bats Theatre until 23 March and 12-21 September in Christchurch.