The death toll from flash floods in Indonesia's Papua region has risen to 89. 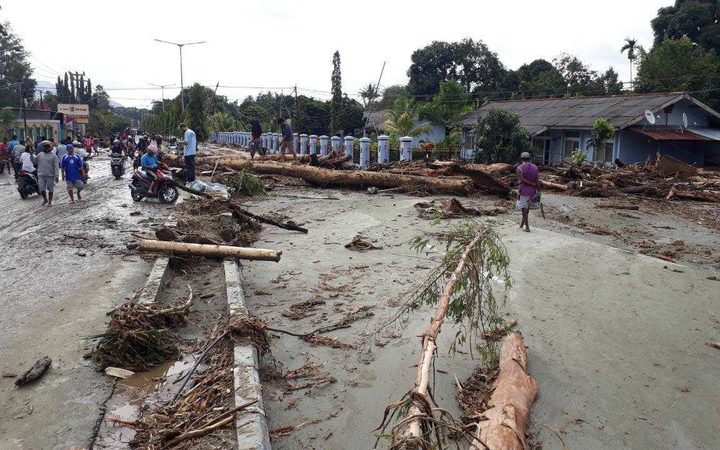 Over 6000 people have been evacuated from flooded villages after days of heavy rain.

The worst affected parts are in and around Jayapura and villages near Lake Sentani which overflowed, spilling large volumes of water through surrounding areas.

Indonesia's National Disaster Management Agency earlier said over 70 people were killed by landslides in Jayapura regency and others died from floods in Jayapura city.

Along with the dead, 74 others are missing and 159 people have been injured.

More than 11,000 families have been affected by the flash flooding.

People are frightened and some are blaming climate change according to Derek Windessy from Indonesia's Red Cross.

"Almost three days or four days. People cannot sleep well. And then they scare. So they need to move to the safety place now," said Derek Windessy.

There are evacuation centres in six locations.

However, finding survivors is the focus for local government, said Mr Windessy, and supplying food and water to evacuees.

He said President Joko Widodo is likely to visit the area tomorrow and denied reports some agencies may have been blocked or prevented from providing aid to those in need.

Indonesia's president Joko Widodo has called for the re-planting of forests around the upper reaches of the river which empties into Lake Sentani, which has risen and flooded surrounding villages.

Indonesia's disaster management agency has attributed the floods to deforestation and encroachment on a nature reserve in the Cyclops Mountains over the past 15 years.

The head of Indonesia's National Disaster Mitigation Agency Doni Monardo has blamed the disaster on deforestation for construction, on steep terrain and the intense rainfall.

He said there is no need for people to cut down trees to improve the economy.

A spokesperson, quoted by Indonesia's Tempo news agency, said the flooding was triggered by extreme rainfall and forest damage.

A month's worth of normal rain fell in the space of seven hours at the weekend.

More than 2000 hectares of rain catchment area has been cleared for development, the spokesman said.

Dobonsolo, Doyo Baru, and Hinekombe districts in Jayapura's Sentani region are reported to be the worst affected.

Medical services and public kitchens are treating and supporting the injured and displaced victims.

Local government and the police are clearing away logs, rocks, debris and other materials with heavy equipment.

Seventy kilometres of roads in the Jayapura, Sentani and Kemiri area are covered with mud and fallen trees.

Disaster authorities say hundreds of houses are damaged and some are submerged.

Meanwhile, clean water, food and blankets are among pressing needs in the flood affected areas.

At least 68 people had died after heavy rain at the weekend triggered floods and landslides around the provincial capital Jayapura.

Rosemarie North of the International Federation of Red Cross and Red Crescent Societies said teams had been going out to assess the needs of displaced people and deliver emergency help.

She said, Lake Sentani which is 20 kilometres from Jayapura had risen flooding surrounding villages.

The Red Cross said it was a worrying situation for people around the lake and in many other areas because the rain is still falling.

Heavy rains have caused major #flooding and landslides in #Sentani, Papua, #Indonesia over the past few days. Many lives and homes have been lost in this disaster. MAF staff are helping efforts to provide food and shelter.

Please join us in praying for all those affected. pic.twitter.com/mbONVnOPhm