Fiji and Papua New Guinea have signed a post-Brexit trade deal with Britain.

It's part of a flurry of trade deals that the United Kingdom is rushing to sign ahead of its planned exit from the European Union. 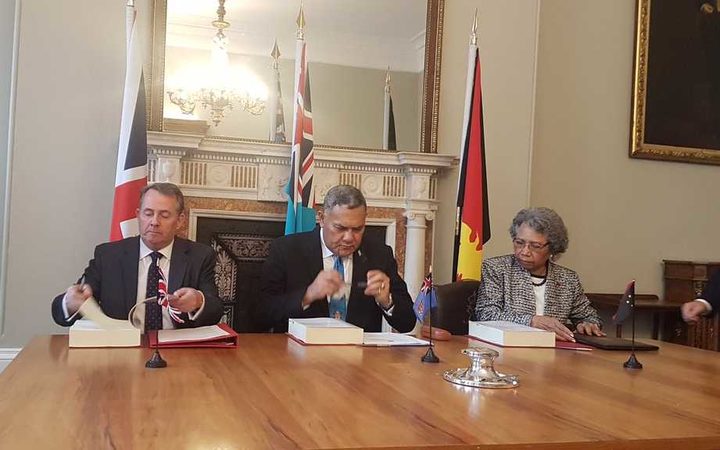 The UK's Department for International Trade said the agreement maintains access to goods including sugar and fish imported from the Pacific countries.

It also eliminates all tariffs on goods imported from Fiji and PNG, and gradually removes around 80 percent of tariffs on UK exports to these countries.

After signing, the UK's international trade secretary, Liam Fox, said the deal would help British businesses avoid paying for around $US25 million in tariffs on imports.

"The agreement is also vital to our long-standing commitment to reduce poverty through trade, including in some of the furthest reaches of the Commonwealth," Mr Fox said.

"With the UK importing 28 percent of Fiji's sugar, and a quarter of the population relying on employment in the sugar industry, this will make a real difference to people's lives and livelihoods," he said.

Total trade between Britain and the Pacific is worth about $US486 million a year.

The agreement has been left open to other countries in the region who might want to join.

It is expected to come into effect as soon as the implementation period ends in January 2021, or as soon as the UK leaves the EU if it leaves without a deal.