A member of Papua New Guinea's Pangu Pati says the party's parliamentary wing is united and committed to the government. 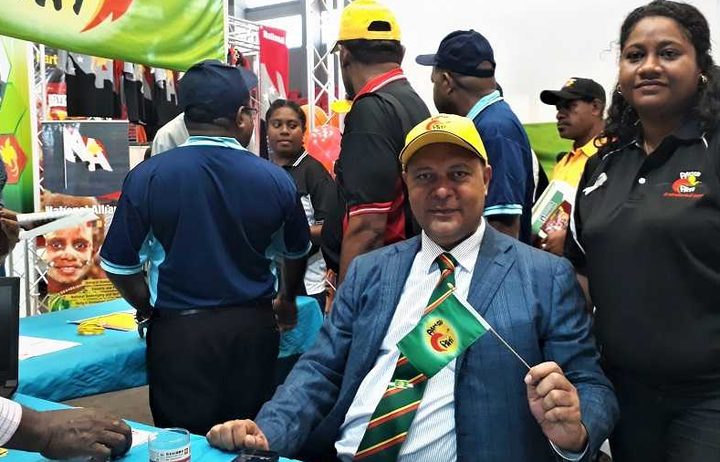 Sam Basil inside the Pangu Pati's stall at a Political Parties Expo in 2017. Photo: Pangu Pati

Local media are reporting Pangu Pati's 14 MPs are resigning due to differences with the executives of the party.

The executives are understood to have opposed Communications and Energy Minister Sam Basil remaining as Pangu leader.

The Tewae-Siassi Open MP, Kobby Bomareo, said divisions remain between the party's two wings over issues around candidate selection for the 2017 general election.

But he said the party's MPs are all still with Pangu.

"People are creating those rumours from outside," Mr Bomareo said.

"From inside the party, we are not resigning as yet. If we are to move, we're going to move as a group. But we are still waiting for our party executives to decide whether they're going to commit to the leader."

The MPs' division with the party's executive opened up after Mr Basil decided to defect to the government in 2017, bringing almost all of Pangu's MPs with him.

Pangu had campaigned strongly against the Peter O'Neill-led government during the 2017 election.

Mr Basil and Pangu's defection was unpopular with Pangu's grassroots supporters, but he was rewarded with a ministerial portfolio.

The second biggest party in Peter O'Neill's coalition government, Pangu Pati has been the focus of speculation around a looming vote of no-confidence in the prime minister.

"Which ever way we move, we're still committed to the current government of Peter O'Neill," Mr Bomareo said.

He explained that despite the executives' differences over candidates for the election, Mr Basil's selection successes far exceeded those of the executive.

"The executives, all their selections never made it through to parliament," Mr Bomareo explained.

Pangu came from virtual political wilderness before the election to be in a position where it came close to being able to form government with other groups that currently remain in opposition.

The Tewae-Siassi said the executive's issue with Mr Basil was "not a big issue", but claimed the executive was "too stubborn to submit to the parliamentary wing".