Pressure is mounting on owners of the Porgera gold mine in Papua New Guinea following a critical report into human rights abuses. 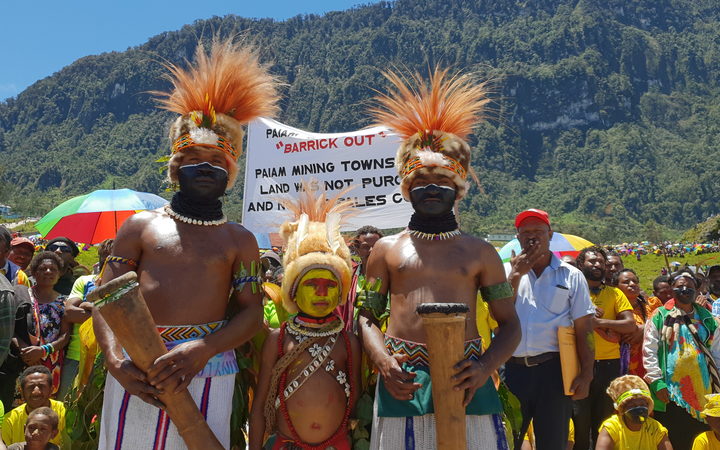 A demonstration at the Porgera gold mine Photo: Supplied

A September 2018 report into the mine's impact on the local community found 920 alleged violations including rape, sexual assault, drownings and shootings.

A community lobbyist McDiyan Robert Yapari said the report showed a path for victims to have their concerns heard and receive compensation in line with international human rights principles.

But he said it had fallen on deaf ears, as talks with the company, Barrick Niugini Limited, appear to be at a stalemate.

"We will try to file law suits in Canada, with Barrick in Canada. But first of all, all we'll be doing is to cry out for help through the United Nations Commissioner for Human Rights."

Late last year, a separate lobby group began legal proceedings through PNG courts against the O'Neill government over the Porgera mine, which Canada's Barrick Gold and China's Zijin Mining Group each have a 47.5 percent stake in. "I want to put it on record that this is not a foregone conclusion that because the operator is operating on that particular mine, that they have the automatic right to this renewal, should we not agree we have every right of option to find other means that our people can have a greater benefit for their mine and the resource that they own," he is quoted as saying in the Post Courier.

The mine's operators, Barrick Niugini Limited, commissioned the September report, 'In Search of Justice', from an independent agency which found the open cut mine had been negatively impacting the local community over several years.

It stresses urgency on behalf of the victims and thoroughness in the mining company's response, independent of the outcome of the pending lease renewal.

"The Porgera mine operates in one of the world's most challenging environments. The mine is in close proximity to residents, often without clear delineation between company and community property. Violent tribal conflicts are endemic to the region. Poverty levels are staggering. Illegal mining is becoming increasingly common and violent. Weak governance is pervasive," the report stated.

Barrick said the challenges associated with addressing the allegations of harm at Porgera are substantial and that significant barriers exist for those in local communities seeking redress.

It noted the social and technical complexity underpinning the resolution of grievances at Porgera.

A spokesperson for Barrick said it was working on a response to the report and hoped to start talks with community and government groups early this year.